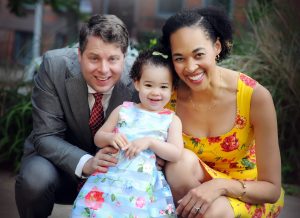 China Terrell is a Bolton Hill mom, a lawyer and activist in city affairs, and the leader of a non-profit organization that advocates for urban improvement. She also is a Democratic candidate for state delegate from the 40th District – the only one from the Bolton Hill neighborhood.

BHCA does not endorse or support political candidates.

“We can agree that the status quo hasn’t been working for many West Baltimore neighborhoods,” Terrell, 44, said. “We need delegates with crucial skill sets for rebuilding the city. Baltimore needs more folks in office who understand the city’s economics and how to shape those economics to make every resident safer, healthier and wealthier.

“What makes me different from other candidates is the ability to deliver powerful, positive results on an accelerated timeline. Working across Baltimore, I’ve shown this on public schools, infrastructure, jobs and our environment,” she added.

Terrell lives on Bolton Street with her husband of nine years, Josh Boak, a White House correspondent for the Associated Press. A military kid, she was born at Camp Pendleton in Oceanside, CA and moved to Maryland as a child. She attended Johns Hopkins University, has a law degree from the University of Minnesota and a master’s in public administration from the Kennedy School at Harvard. Their daughter, Elaine, 5, is finishing pre-school at Bryn Mawr Little School. The family attends Brown Memorial Presbyterian Church.

She is running, she says, to help the city overcome its stubborn problems. “Baltimore is succeeding in attracting young college graduates who have the potential to become part of the city’s economic engine. Our challenges include the ongoing loss of working-class families, the 41,000 vacant or empty properties, the dizzying level of gun violence, and the low value in services received relative to taxes paid, from schools to trash collection.”

Look at her website and campaign materials and you’ll see that Terrell favors state action to reduce local taxes, crack down on homicides, make pre-K education available to all children at age three and to index the state’s minimum wage to the inflation rate. Terrell has been endorsed by Our Revolution Maryland as a “progressive champion.”

“The nonprofit I lead helps create economic opportunity for working-class residents. It focuses on raising incomes, creating jobs, and building wealth. And it brings investments into working-class communities through tax credit financing, including new markets tax credits and federal and state historic tax credits,” she said.

In Bolton Hill, she added, “we have vacant commercial properties that could benefit from more focused attention and support from elected leadership. I look forward to (1) helping transform the rear of the Save-a-Lot shopping center so that illicit activity there ends; (2) working with the shopping center owner to address facility repairs and vacancies; (3) holding state leaders accountable for the lack of progress on State Center; and (4) working with neighboring community associations and the City to fill the four-acre vacancy that closing Eutaw-Marshburn school could leave behind in June 2023.”