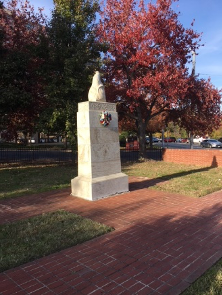 A Veterans Day Program will be held on Wed., Nov. 11 at 11:00 am in Congressional Medal of Honor Park on Bolton Hill’s southern edge.  The socially distanced program will include a reading by Mayor Jack Young, participation by neighborhood clergy and a reading of the poem “In Flanders Fields.”

On Aug. 17, 1939, a monument placed in the area at the corner of Preston and Howard Street, adjacent to the Fifth Regiment Armory, was dedicated to two Baltimore heroes who had been honored after World War I with the Congressional Medal of Honor. The Memorial Craftsmen of America commissioned the Monument and organized the event, which was attended by 1,000 people, including the state’s 51st governor, Herbert O’Conor,  and officers of the American Legion.

Private Henry G. Costin was born June 15, 1898, in Baltimore and graduated from Baltimore City College in 1914. After enlisting in the Army in 1917, he fought in France. On Oct. 18, 1918, near Bois-de-Consenvoye, Henry was killed while performing an act of extreme heroism, for which he was awarded the Congressional Medal of Honor.

Ensign Charles Hammann was born March 16, 1892, in Baltimore and attended Baltimore Polytechnic Institute. He joined the Naval Reserve in October 1917. He was awarded the Congressional Medal of Honor after, as a pilot off the Austro-Hungarian coast, he dove down next to a downed pilot and brought him to safety.

The Monument was moved to its present location at Park Avenue, Howard Street and Dolphin Street during Urban Renewal.