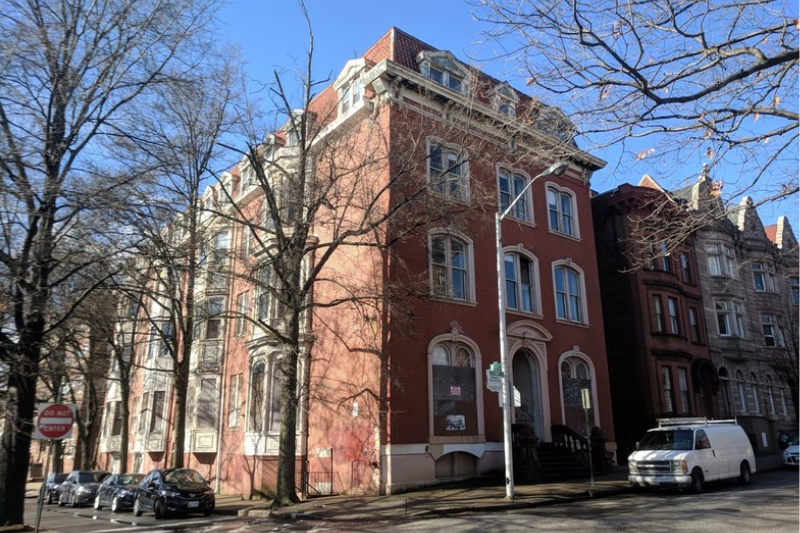 An attorney and an architect, appearing on behalf of the owners at 1700 Eutaw Place, have asked Bolton Hill Community Association to endorse their request for a zoning change that will lead to the renovation of a long-vacant apartment building at the northwest corner of Wilson Street and Eutaw Place.  Real estate lawyer Adam Baker and architect Lance Decker are seeking a zoning adjustment to expand the building from 19 units authorized for a previous, uncompleted restoration to 24 units.

At the March BHCA board meeting, the two representatives for the property owner were questioned about parking issues, construction and demolition plans, and trash removal.  As an historic building, no off-street parking is required, but the representatives said they expected many of the tenants to be university students without vehicles and said the units would be bike-friendly. They said no significant exterior design changes were contemplated, with existing bay windows a feature for most units.

Board members took no action but suggested that a tour of the building for board members and neighbors be arranged.  The architect said once zoning and licenses were in place, construction would take place over about 14 months.  The project calls for 11 one-bedroom, 12 two-bedroom and a single three-bedroom unit, each with its own washer/dryer.  Some would be rented at market rates while others are subject to supervised pricing by the U.S. Department of Housing and Urban Development.

The board was generally welcoming to a renovation of the property but withheld acting on supporting the zoning change until more information becomes available.

EVERYONE COUNTS IN BALTIMORE

ON-STREET PARKING PERMITS DO NOT EXPIRE AT END OF MARCH