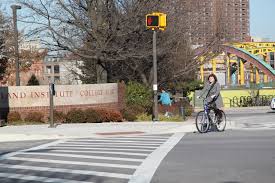 At June’s Board Meeting, Caitlin Doolin, bicycle pedestrian coordinator at the City Department of Transportation (DOT) provided an update on the Mt. Royal Avenue streetscape project, that will resurface, recurb, and install a bicycle lane, plus provide aesthetic signaling and metered parking from Guilford to McMechen Streets.

This federally-funded, state-approved project has been in the final design phase for more than a year. Construction is slated to start March 2016 with a projected 265-business day work period. When asked that MRIA receive at least 30 days’ notice before work starts, Veronica McBeth, transit bureau chief at the City DOT, said the DOT will strive to give more advance notice.

John Kyle asked about the streetscape project comments MRIA sent to DOT in May 2014 that have never received a response. Doolin explained that much of MRIA’s input has been incorporated into final tweaks to the project before state approval. As follow up, she will send MRIA via Steve Howard the DOT’s comments and responses, plus a timeline of meetings.

Though the current plan does not address the cracked and disjointed sidewalks on West Mt. Royal, MRIA voiced its desire to work with the City to have this sidewalk resurfaced for pedestrian safety.