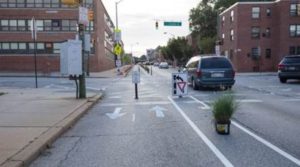 As many of you may recall, the city has long planned to install bicycle lanes along Mt. Royal Avenue. Almost three years ago, after a public meeting in February 2014, and discussion at the April 2014 MRIA board meeting, John Kyle, then-president of MRIA, wrote a letter to the Director of Transportation, explaining a number of our concerns. After another public meeting on August 1, 2016 at University of Baltimore and several more meetings, many of those concerns have been addressed, and the plan is moving forward.

There will be two-directional bicycle traffic along the north/east side of Mt. Royal Avenue, separated from traffic lanes. While it is impossible at this time to extend the bike lanes all the way to North and Guilford avenues, the city hopes to add those extensions in the future.

Special pedestrian-friendly crossing signals will be implemented at the busiest intersections. These signals go to “walk” five seconds before the traffic light in the same direction goes green, which allows pedestrians to get well into the crosswalk before turning drivers usurp their right of way.

To accommodate these changes, the median of Mt. Royal Avenue will be slightly narrowed, and some trees will be removed and replaced. Although technically outside the scope of this project, the city also has committed to repairing the sidewalks in front of the houses along the 1400 and 1500 blocks of Mt. Royal.

Construction is expected to start in spring of 2017. The city intends to divert much of the northbound traffic to Charles St. and the JFX onramp at Penn Station. We hope that some of that diversion will be permanent.

In a separate project just off Mt. Royal near the Light Rail Station, the Dolphin Building has been torn down and the site is being prepared for construction of a new MICA building. Watch this space as this building project moves forward.

The Baltimore Bikeshare program will also launch soon. Residents will be able to use a bike for a small fee, allowing them to get around more easily when they don’t really need to drive. More info on proposed locations, including those in and around Bolton Hill is available at https://www.bmorebikeshare.com. A limited number of Founding Member passes were still available for purchase as of press time.