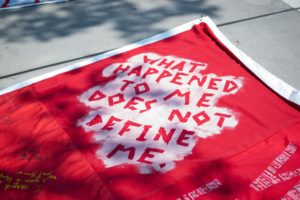 Congratulations to Bolton Hill neighbor Rebecca Nagle and the arts group she co-founded, FORCE: Upsetting Rape Culture, for winning this year’s Janet & Walter Sondheim Artscape Prize. They will receive the $25,000 grand prize, which is awarded each year during Artscape.

They were honored for their creative public art projects, events and internet campaigns, including the Monument Quilt project, which they describe as “a public healing space by and for survivors of rape and abuse.”

The quilt is collects stories from survivors of rape and abuse, and is displayed in public to “create and demand public space to heal,” they write. “The quilt resists the popular and narrow narrative of how sexual violence occurs by telling many stories, not one” and thereby “builds a new culture where survivors are publicly supported, rather than publicly shamed.”

This past spring, the Monument Quilt was displayed on North Avenue between Howard and Charles Streets in preparation for a tour of other cities this fall. The goal is to grow the quilt to 6,000 fabric squares so that it will blanket over one mile of the National Mall in Washington, and spell out “Not Alone.”

Learn more about FORCE and The Monument Quilt here.

Do Yoga in Bolton Hill