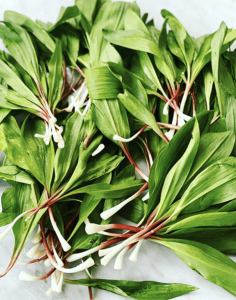 It’s mid-March which means in a few weeks, we will be lucky enough to see ramps pop up at the farmers’ markets. These wild onions are a spring delight–perfectly garlicky and oniony and work well in so many dishes. Their season is fleeting, lasting only from April until May or early June. Have questions? Here’s a quick 101 on a foodie’s best friend, the humble ramp:

If you see ramps sold at the farmer’s market, do yourself a favor and grab a punch. Chop them up for fried potatoes for your breakfast or sauté them and serve on pork schnitzel sandwiches. Or, try out my recipe. This poached cod with ramps and pecorino Romano broth capitalizes on the pungent flavor of the ramps and pairs it against a flavorful and fragrant pecorino broth. This rich, garlicky broth is the perfect vehicle for poached cod, but try this recipe out with shrimp or scallops.

Get the recipe here

–Kylie Perrotti, a founder of the Baltimore Supper Club