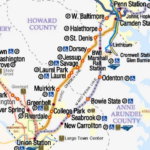 Day in and day out, more than 30,000 people make the daily trek from Maryland to Washington DC, traveling 4-6 hours per day just to be able to call Charm City home. These are their stories.

n. a hard, discordant mixture of sounds. “a cacophony of deafening alarm bells”

I’ve got my own version of cacophony on the MARC train in winter: The Ca-COUGH-ony.

It starts with one cough. The woman in front of me. Loud. Abrupt. Intrusive. Unapologetic. It rouses me from my numb, MARC-train-number-507-5:50am-departure-sleepy state of being.

A slight pause, then the soft sniffle of the person next to me. Innocent. Needy. Sickly. Sorrowful.

Then suddenly, seemingly from nowhere, the ca-cough-ony begins. It seems that everyone is coughing, sniffling or sneezing at the same time. Long raspy coughs, short repetitive coughs, sneezes that end in whoo-hoo and ones that sound like a boar snorting in the wild. Combination coughs: Cough-sniffle-cough or cough-cough-sniffle—that come in regular 15-second beats like a broken record.

I become focused on the sounds and can’t escape them. I left my headphones at home. Again. How I wish I could crank up the iPod and drown out these sounds! But after some time, I start to hear, or imagine that I hear, patterns in these discordant sounds. Could it be that these sounds are weaving into an arrangement? Not so much a ca-cough-ony as a symphony of sickly, sniffly, sneezy sounds? Is Old Man Winter at the head of this train car waving some invisible baton trying to wrangle the sounds into some sort of music?

If he is, it’s more like a third grade band recital than the BSO.

Alas. No. It’s nothing like that. It’s just my imagination—and the steadfast, hardworking gaggle of commuters who travel the MARC train daily, even when they’re sick, to get to work.

Here’s to more music and less coughing in 2017!

“Getting Involved” – Got Photos?

Pamper Yourself at the New Bolton Hill Salon

The Commuter Chronicles #3: The Ca-cough-ony