Both violent and property crime have been on the decrease over the past six months. Nevertheless, because we often see an uptick in crime as the temperature rises, the MRIA Safety Committee wants to remind readers of the role the entire community can play in the criminal justice process.

Below are major crime data (assault/robbery, aggravated assault, and burglary) for the last six months (mid-November – mid-May) for the 132 Central District post, encompassing all of Bolton Hill, parts of Reservoir Hill and some areas west of Eutaw St. 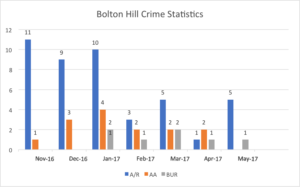 What can the community do to mitigate the impact of crime? Most importantly, do what you can to avoid becoming a victim. The Safety Committee has collaborated with Midtown to offer four self-defense classes, which will be held at locations throughout Mt Vernon and Bolton Hill. Anyone can enroll for these classes.

In the instance when a crime does occur, it’s important for the community to be engaged in the process at every stage. They can elect judges and submit community impact statements; but they can also play an important role as attentive and active observers. To have the greatest impact, citizens must stay informed about a very complicated process.

Victims, of course, are at the center of any case, because it is up to them whether or not to press charges. The victim also makes certain that the charges and police reports are accurate and complete.

It is essential that victims remain engaged in the judicial process, even though doing so can be emotional and at times traumatic. Without the victim present, charges can be dismissed. As Baltimore Police Department Commissioner Kevin Davis reported at the May MRIA meeting, more than 50% of cases involving guns are dismissed because the victim does not show up for the trial.

Perhaps the most important thing the community can do when an arrest is made and a court date set is to encourage, support and empower the victim. Victims of crimes, as well as their representatives and witnesses, have rights that include:

During the preliminary hearings and the trial itself, the victim will be consulted but community impact is not considered. However, they can be called upon to offer community impact statements once a defendant has been convicted, during the sentencing process.

It is important for community members to remain engaged throughout the course of a trial in order to be able to most effectively argue the community impact during sentencing. Commissioner Davis pointed out that in gun-related arrests that resulted in a conviction and the imposition of a sentence, the sentence was suspended in 60% of the cases in Baltimore City.

Community members should also keep in mind that judges are elected officials, which gives citizens the opportunity and responsibility to assess their performance in managing the judicial process through the power of the vote.