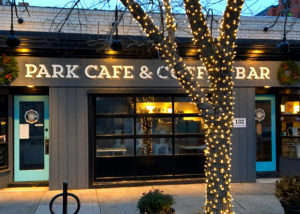 Everyone knows the restaurant business is tough. Sadly, two neighborhood establishments have shut their doors.

After six years of serving Cajun-themed pizzas with names like the Hogwallop and The Dude, Two Boots pizza café on Mt. Royal Avenue quietly closed in April.

Then on Saturday, July 8, the Park Café & Coffee Bar served its last customers. Partners David Hart and Joe Costa explained that the decision to close did not come easily for them. Neighbors may worry that their closing was due to the multiple robberies which occurred this past winter, but they explained that changes in their personal priorities, rather than external forces, were involved. Over the last three years, operating the cafe has caused them to miss many birthdays and skip vacations. Now they can spend more time with family and friends.

“The café continues to do well financially and our level of service and the food produced remain excellent, which is why we feel now is the time to leave, while we’re on top of our game,” says David. “We are proud of what we have accomplished, and thankful for the tremendous support we received from the greater Bolton Hill community over the past three years. It has been our pleasure to serve you.”

Named for the boot-shaped peninsulas of Italy and Louisiana, The Two Boots restaurant chain started in New York City’s East Village in 1987 and spread to Los Angeles and several other states. Here in Baltimore, however, it apparently couldn’t compete with the dozens of shops in the city’s robust pizza scene. Two Boots was founded by Phil Hartman, a former Baltimore resident, and ex-wife Doris Kornish, and run by Hartman’s son, Leon. An earlier location at Power Plant Live closed earlier.

If you’ve ever wanted to run a pizza joint or a coffee bar, here’s your chance. Both properties are looking for new owner-operators. Those interested in Park Cafe should email Joe and David at costahart@yahoo.com or call (443) 509-3934. Since David and Joe own the building as well as the business, they have the latitude to be creative in their negotiations.

If Two Boots or pizza are more your scene, Bolton Hill resident Monica Lavorgna manages retail properties for The Bozzuto Group, which owns the Fitzgerald apartment building that houses the former Two Boots, along with The Brass Tap pub and Barnes & Noble bookstore. “We are in the process of working with the Segall Group to find a new tenant for the space and hope to have new tenant, most likely a food use, to announce sometime this summer,” Lavorgna said.