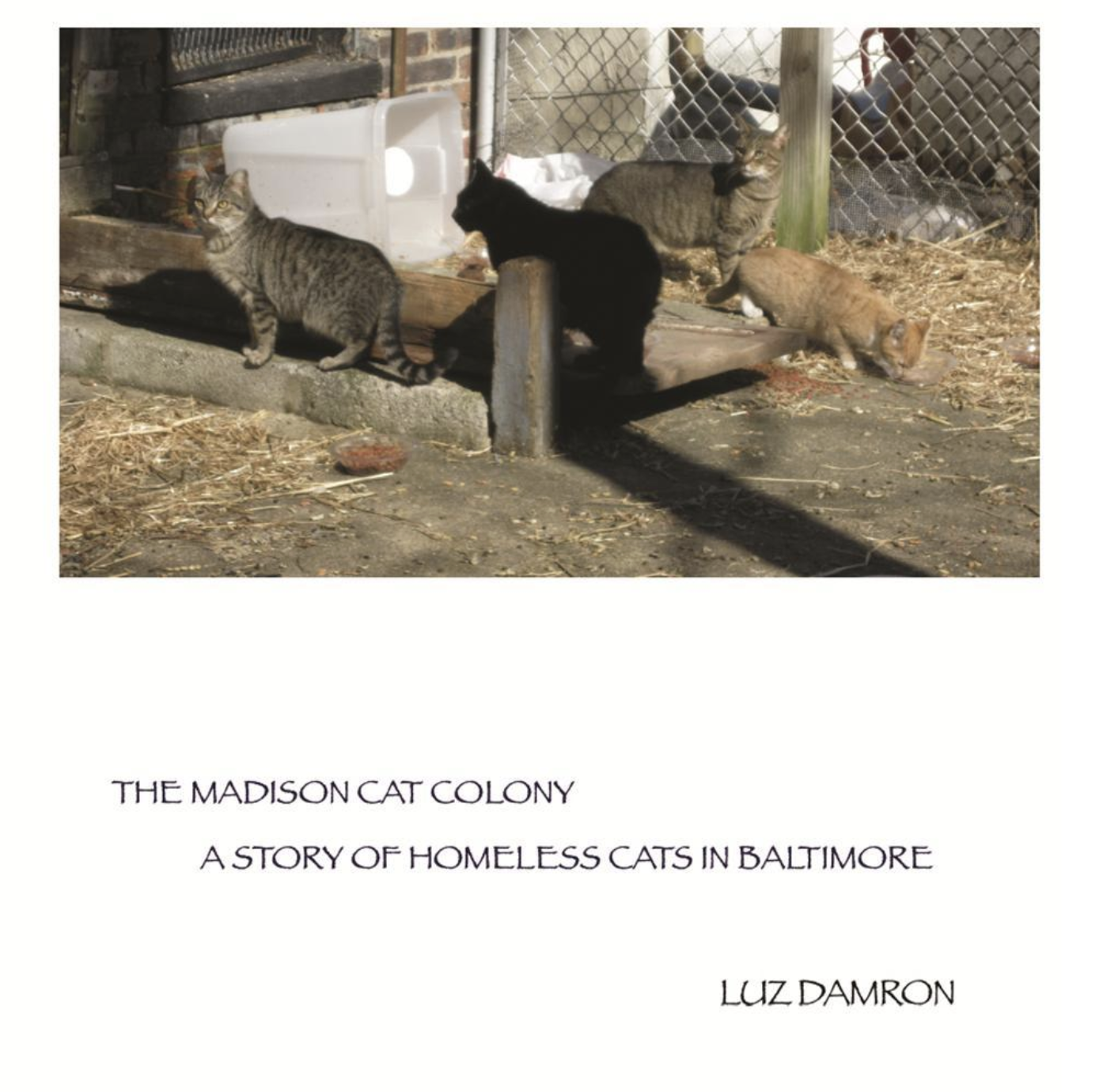 When she moved to Baltimore in 1995, Luz Damron probably was ill-prepared for the rough-and-tumble ways of central west Baltimore.

She had lived in a lovely small village in New York’s Nassau County, hung out at the Stewart Manor Country Club with its tennis courts and swimming pool and wine-tastings.  She remembers lobster dinners with a favorite chilled New York State white wine at the summer home on Shelter Island.  She spent time in mountainous Asturias in green northern Spain, home of her parents who immigrated to New York and ran a Manhattan restaurant and  summer resorts in the Hudson Valley.

Moving to a house on Lion Park in Bolton Hill in 2006 led to an expansion of Luz’s longtime support for homeless cats, especially the 185,000 she says reside in our city.  Getting to know some of them and their human neighbors in nearby Madison Park and elsewhere led her to publish The Madison Cat Colony, a book about abandoned cats who make a life for themselves but depend on the kindness of strangers.

Published by a Pittsburgh print house, the book mostly centered on the area around 1423 Madison Street, just west of Bolton Hill, a once comfortable but long abandoned rowhouse where Momma, Tortie, Bear, Stripe and an assortment of other cats, 15 in all, lived in this decrepit house. (Today it is nicely restored and valued at $300,000 but that is a story of urban gentrification, not part of the Trap, Neuter and Release (TNR) narrative that Luz Damron rolls out.)

Luz, Carmen, Nat and Yeli brought food, spay and neuter, and veterinary care to the bleak lives of cats who were, in some instances, dumped by owners to live on the streets.  They teamed with Best Friends, an out-of-state organization thar brought a million dollar grant to Baltimore to spay and neuter homeless cats over three years.  Veterinarians and people like Kavin, Kevin and Tony who lived in the area of Madison Street and nearby Mosher also helped.

The book is diary-like, conversational and deeply personal, filled with the opinions of those who do cat rescues in Baltimore.  The short vignettes such as “The Army of the Kind” are easy reads, suitable for young people and for people in the city who care for cats.  They will read about “a Cat Lady’s worse nightmare,” when a cat disappears from a colony.  Also, about seemingly ruthless developers who throw out shelters and feeding equipment with no sympathy for cats ensconced in the basements and under porches of houses when they come to renovate. “Everyone wants compassion but giving it to homeless creatures is not a priority for many,” Luz discovers.

Luz and her husband Noell live on West Lanvale.  She has taught Spanish classes and has been an Interpreter and he oversees networking and cyber-security at Community College of Baltimore County.  She wrote an earlier book, The Rifton Hotel: A Summer Place.  They have three adult children.  The book is available  at the Kelmscott Book Shop at 34 W 25th St. and online through Amazon and Barnes&Noble.  It also can be acquired directly from the author:  asturianayfelina@gmail.com. The money for the book will be given to the colony cats as needed, she says.