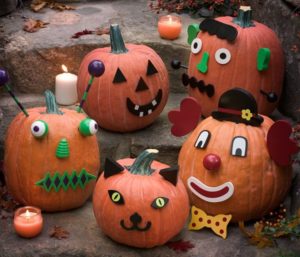 MRIA’s Social Action Task Force (SATF) encourages you to save the date of Saturday, October 29 for some big Halloween fun.

First, in the afternoon from 1 to 3 pm, they plan to host an Ugly Pumpkin Decorating Party, with costume making, face painting, a parade, candy, and of course, pumpkin beautification.

That evening, for the over 21 crowd, the SATF is partnering with Memorial Episcopal on a Halloween Bash in the Parish Hall at 1407 Bolton Street.

Both events will feature non-profit organizations that work in the 21217 zip code, allowing party goers to find out more about what they do and how we as neighbors can help. Details will be published in next month’s Bulletin.

The Halloween events continue a busy year for the SATF. Their inaugural Party with a Purpose in January was a big success, followed by the springtime Stoop Party in April.

Then came Boltonstock on June 25, a crowd-pleasing evening of music, food, dancing and support for some great neighborhood organizations, who distributed information and sold crafts and other goods. Jubilee Arts said they sold more T-shirts at Boltonstock than they had anywhere else to date.

So, put October 29 on your calendar! Why an Ugly Pumpkin party? Because the SATF hopes that pumpkin farms will donate the ones that they weren’t able to sell elsewhere for the party to decorate.

If you’d like to help out, the SATF will be accepting donations throughout October (locations and contacts will be announced in the next issue). They can use any or all of the following:

If you are interested in helping organize the event, please email the SATF at boltonhillsocialjusticeleague@gmail.com.

Working Hard for Our Neighborhood Parks

Halloween Party with a Purpose

Festival on the Hill is Coming

Building Trust, Working Together for Change