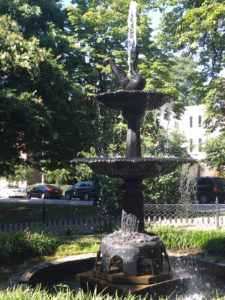 After years of negotiations and repairs, the Gunther fountain in the 1400 block Eutaw Place median is finally flowing once again, thanks to the persistence and commitment of your Bolton Hill neighbors.

Our many neighborhood parks—over twelve, in a neighborhood of fewer than 30 square blocks, and a few stretching across multiple blocks—make Bolton Hill a special place to live in the city. But these parks don’t take care of themselves.

The city’s Recreation and Parks department and the Midtown Community Benefits District provide some basic services to our parks, including mowing, tree-trimming, and sometimes watering. The Bolton Hill Garden Club also works in the parks, and raise money for greening grants that are an important resource for the neighborhood. But the lion’s share of the work done in Bolton Hill’s dozen or so parks is done by us—your neighbors. Some do it out of a desire to beautify their surroundings. Others simply love making things grow. But regardless of their reasons for doing it, it’s a lot of hard work.

Jackie Richardson is one of the neighborhood’s most tireless park caretakers. You can see her working out in Fitzgerald Park at the corner of Bolton and Wilson Streets pretty much every day from early spring until snow starts to fall. In spring, she’s preparing beds and planting. In summer, she sometimes waters the park twice daily. In fall, she’s raking leaves. Weeding happens pretty much year-round. Amazingly, she knew almost nothing about gardening when she started working with Andrew Fontanella in Fitzgerald Park several years ago. But now she is working toward getting her Master Gardener’s certification.

Jackie is currently the primary caretaker of Fitzgerald Park, and other parks are also cared for mostly by individuals—including Debbie Healy, who has turned the small triangle-shaped lot at Lanvale and Rutter St. into a shady oasis of flowering trees and perennials, and Susan Van Buren, longtime caretaker of Zippy’s Garden at the eastern end of the Mosher St. “dog park.” 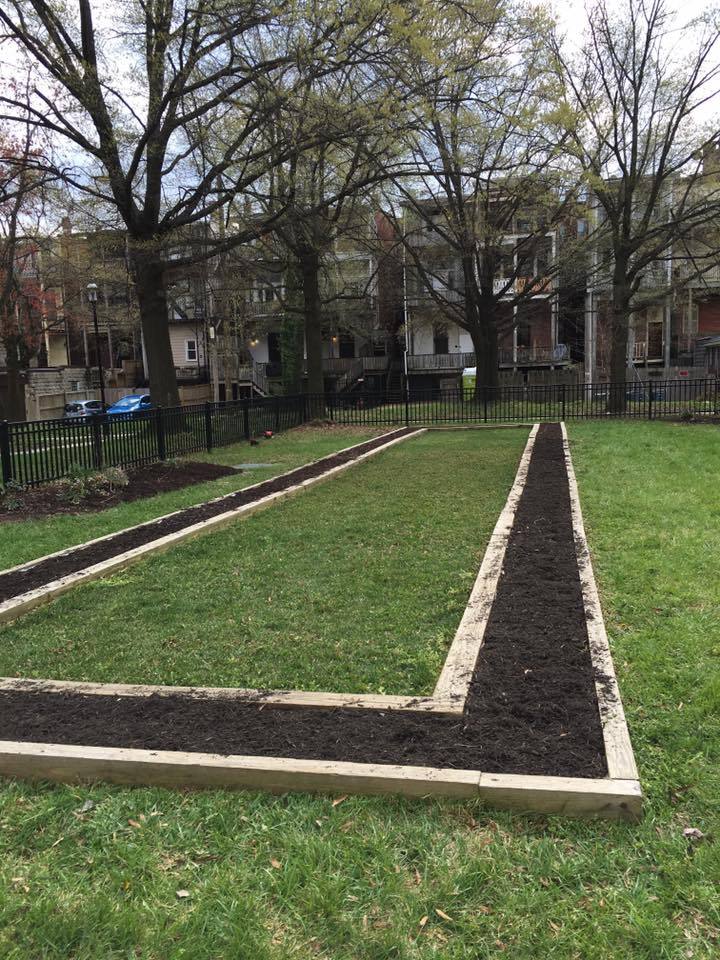 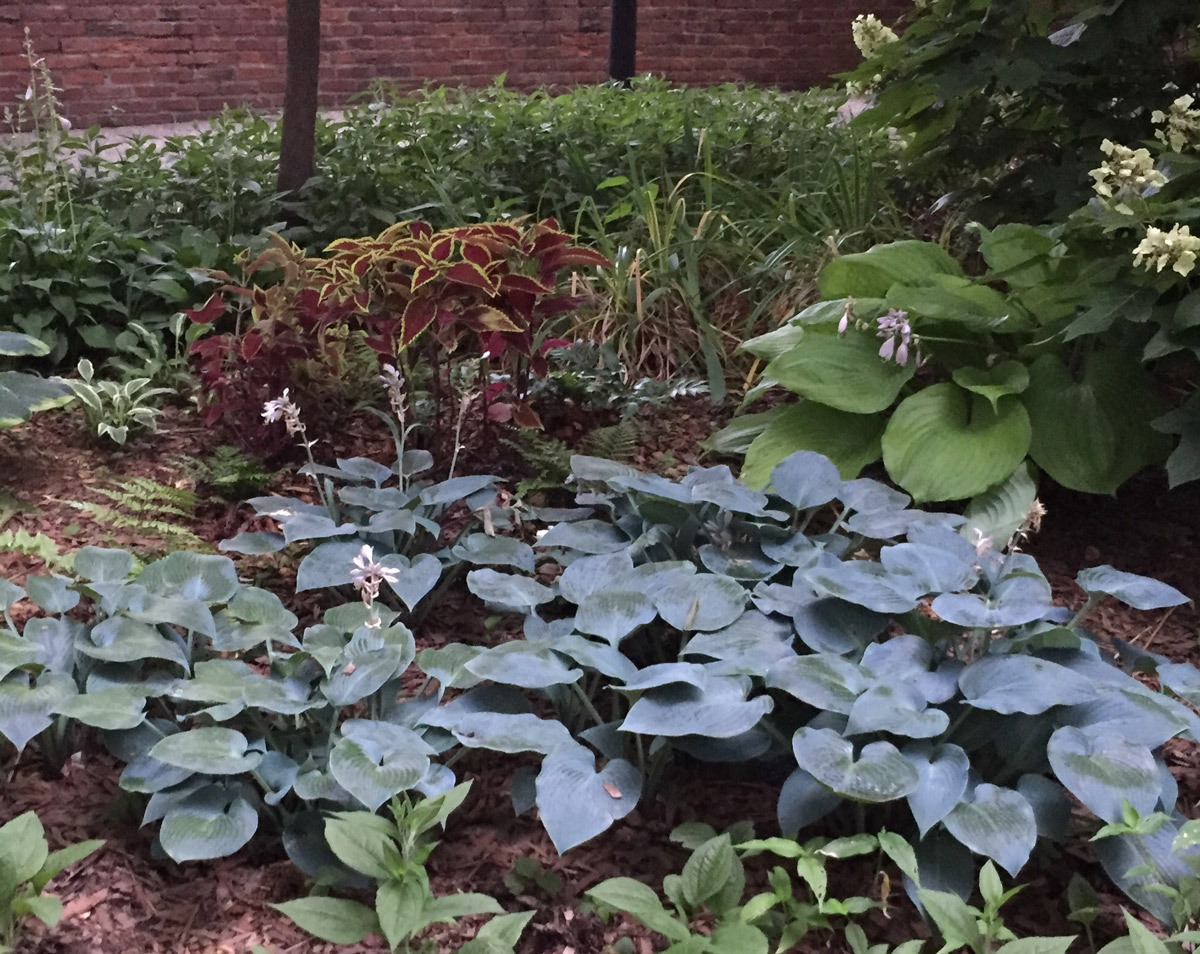 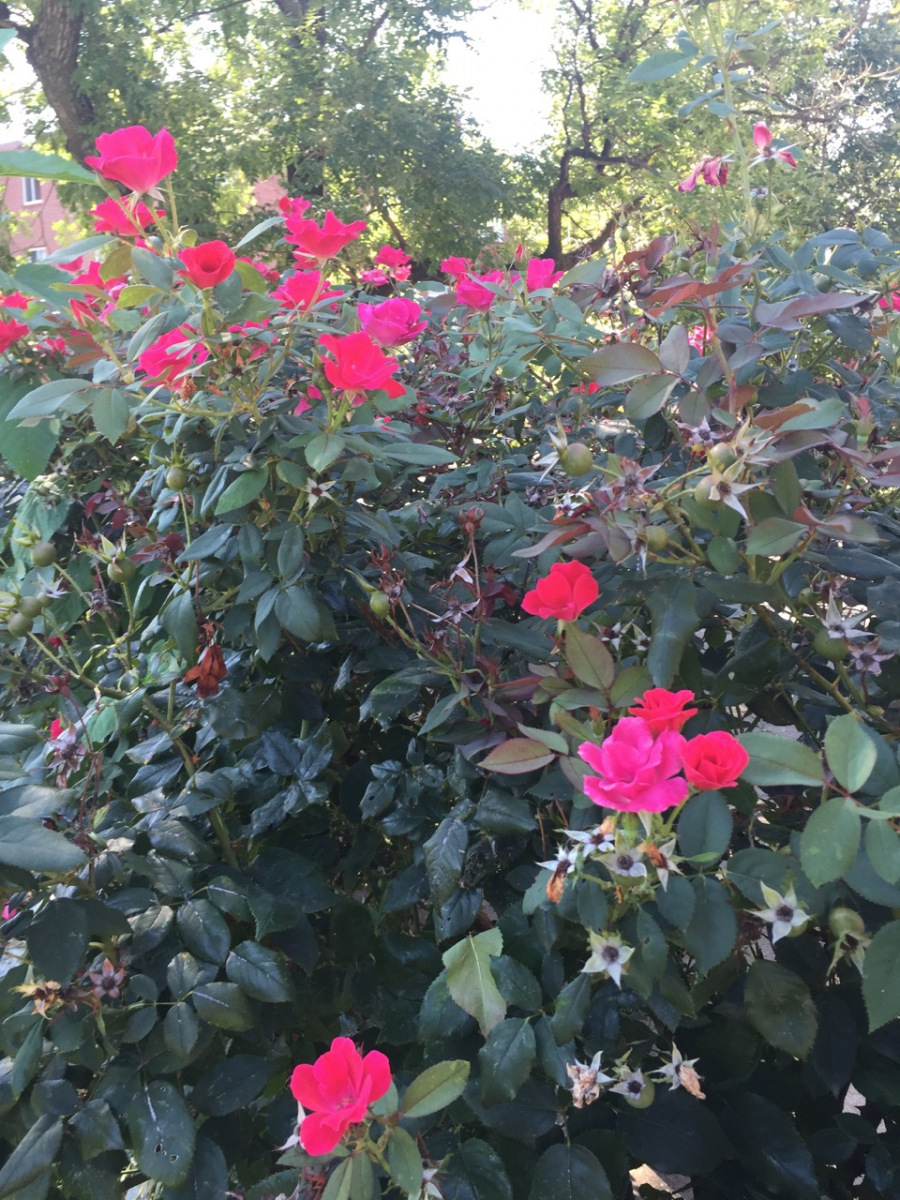 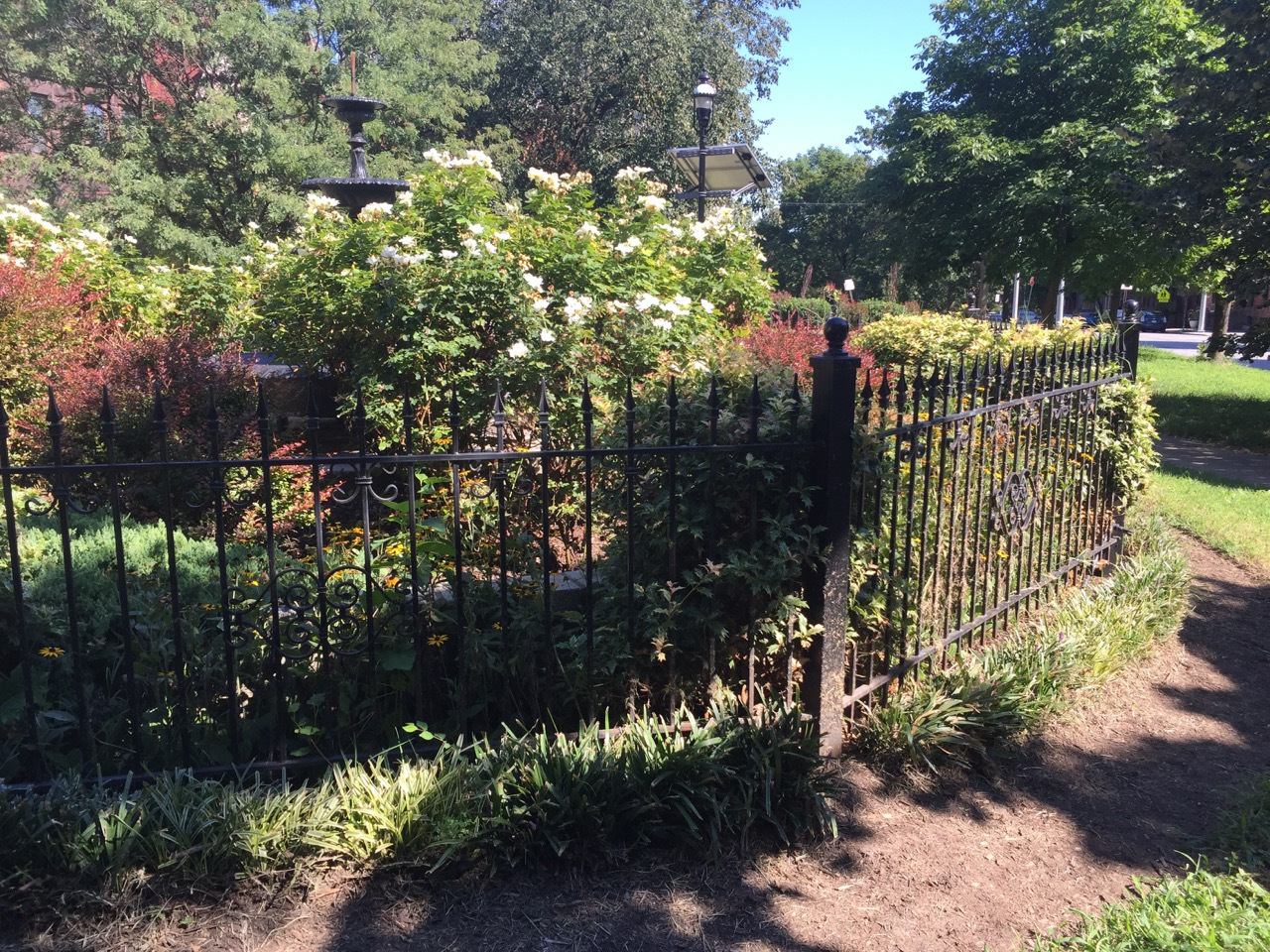 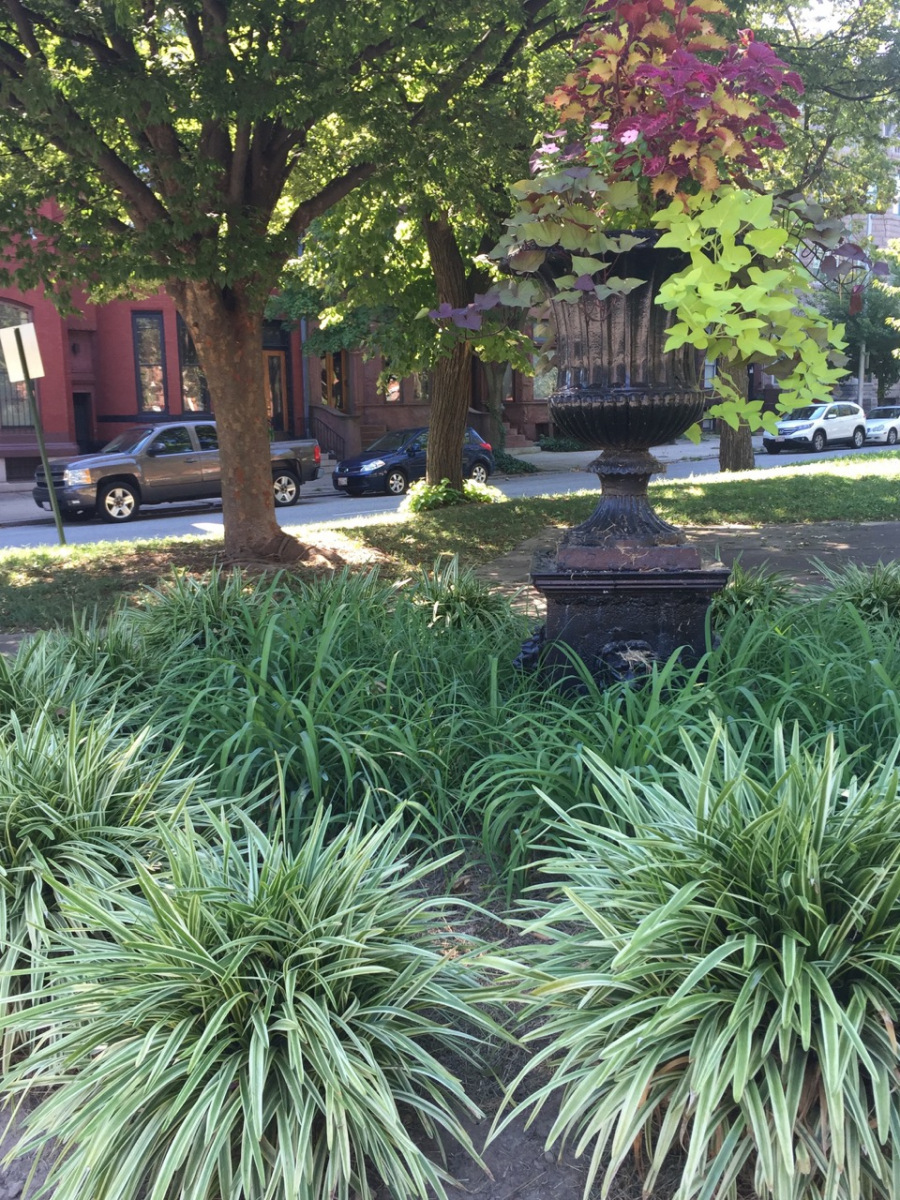 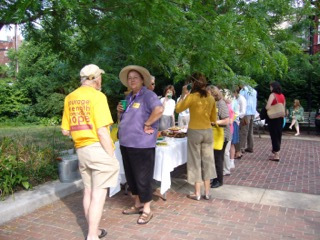 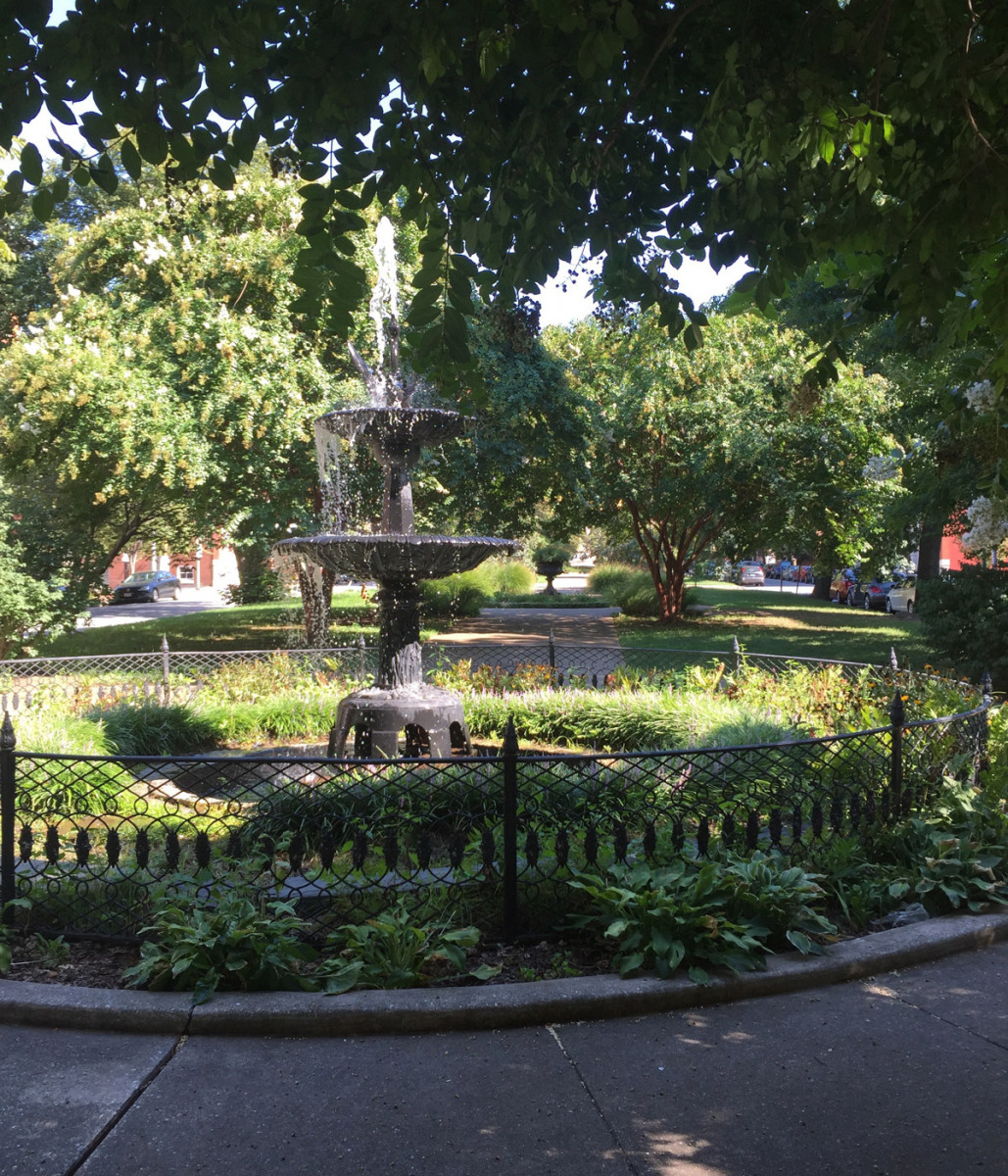 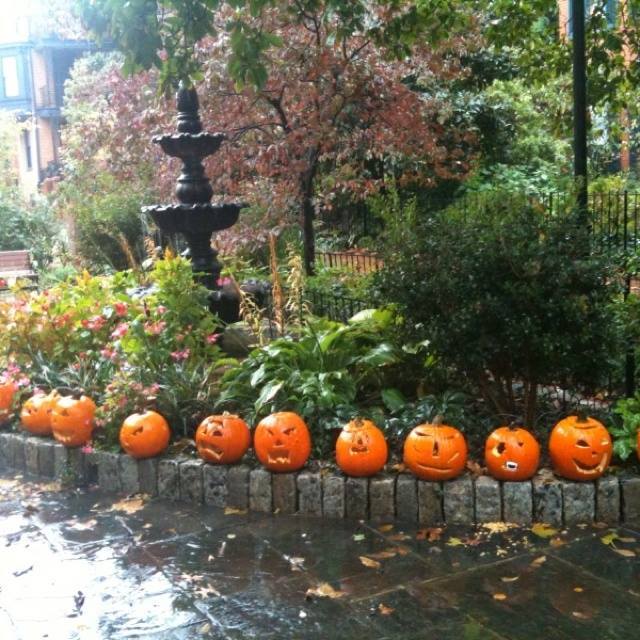 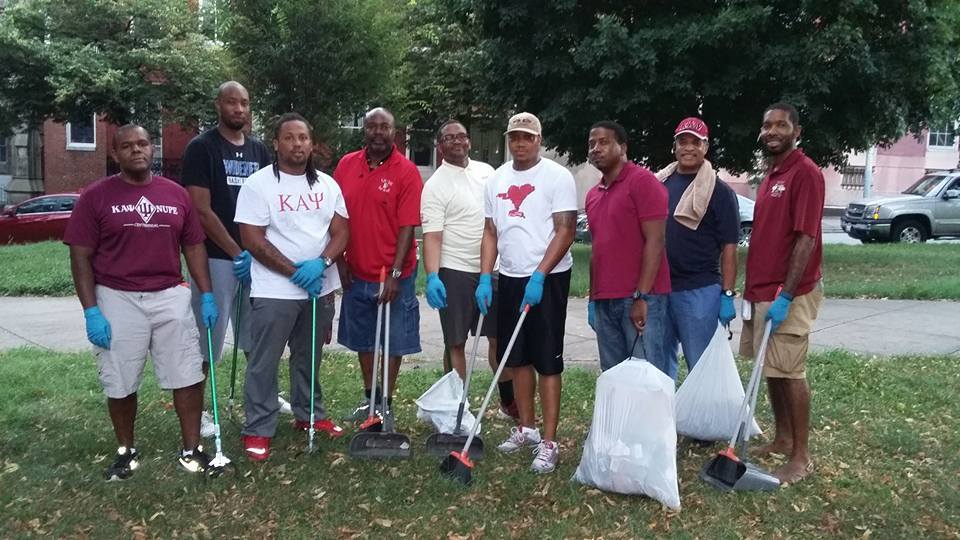 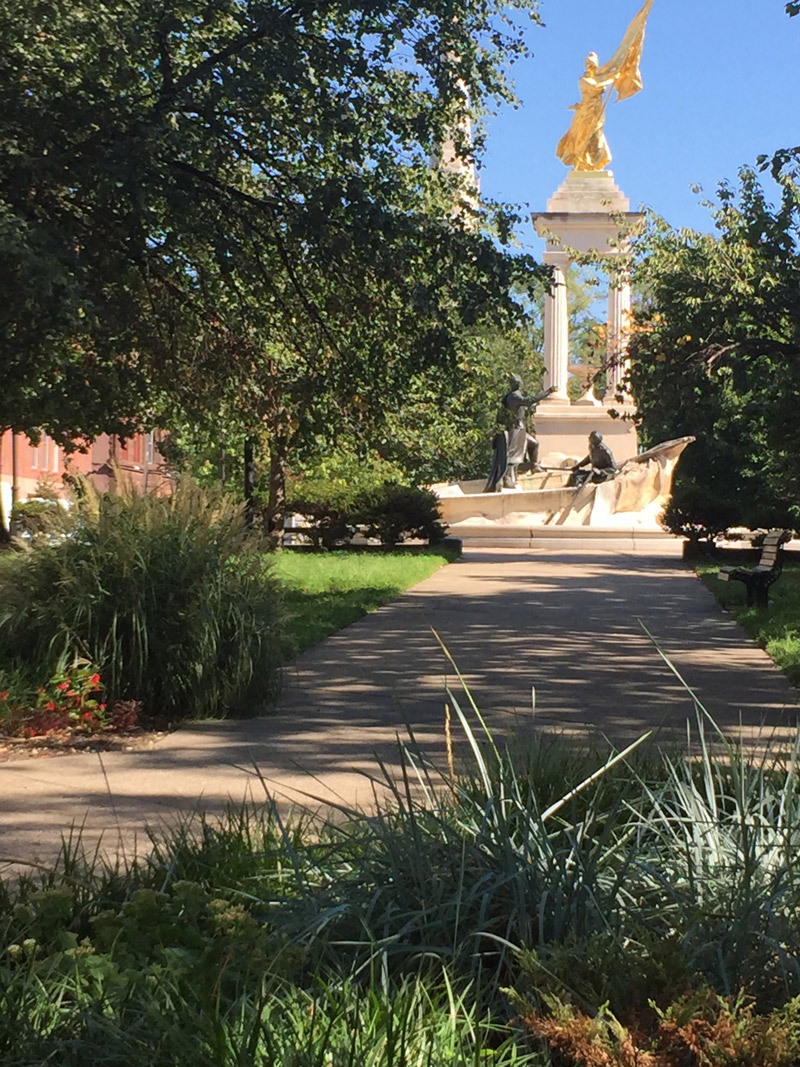 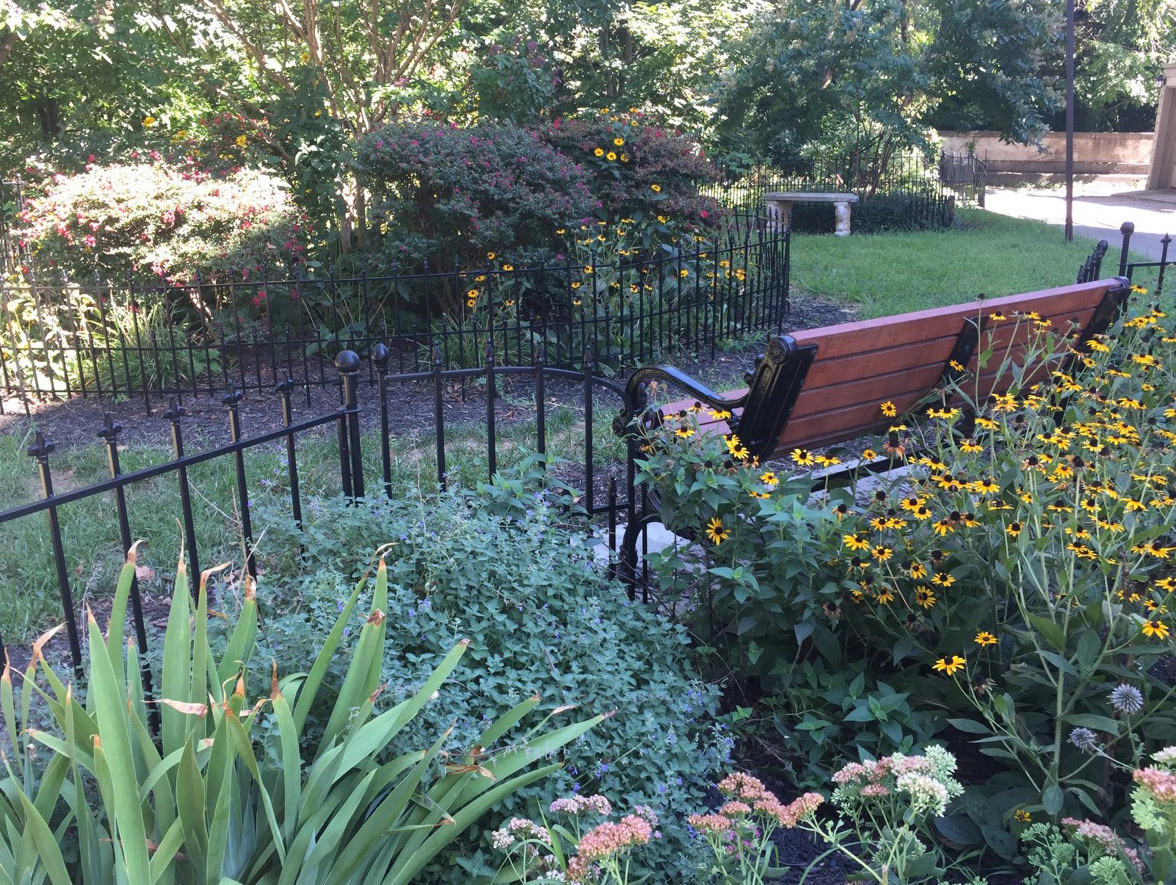 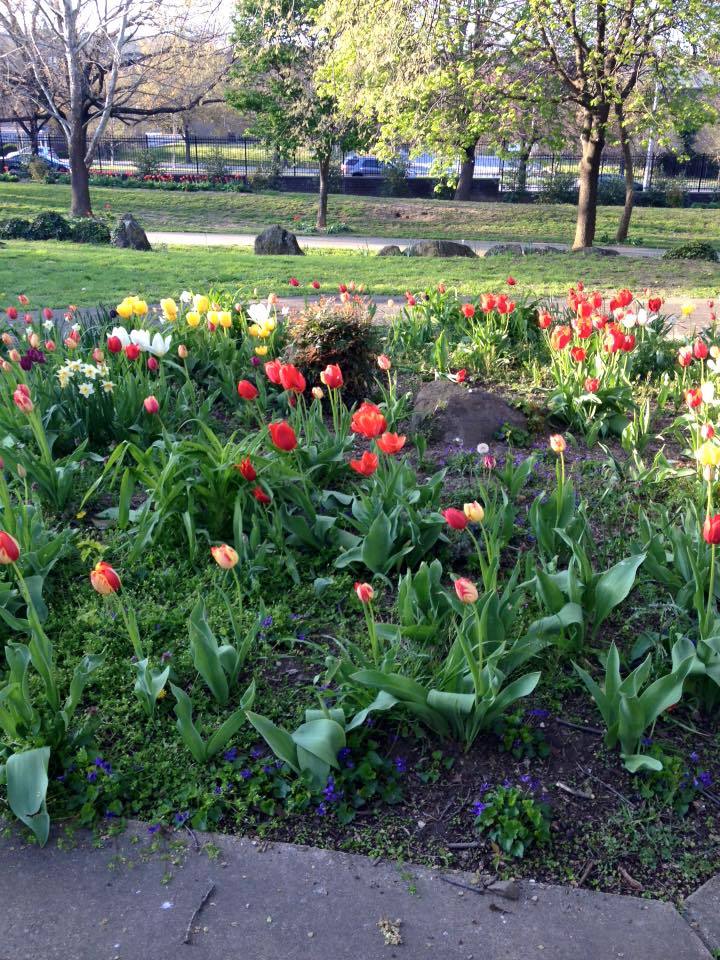 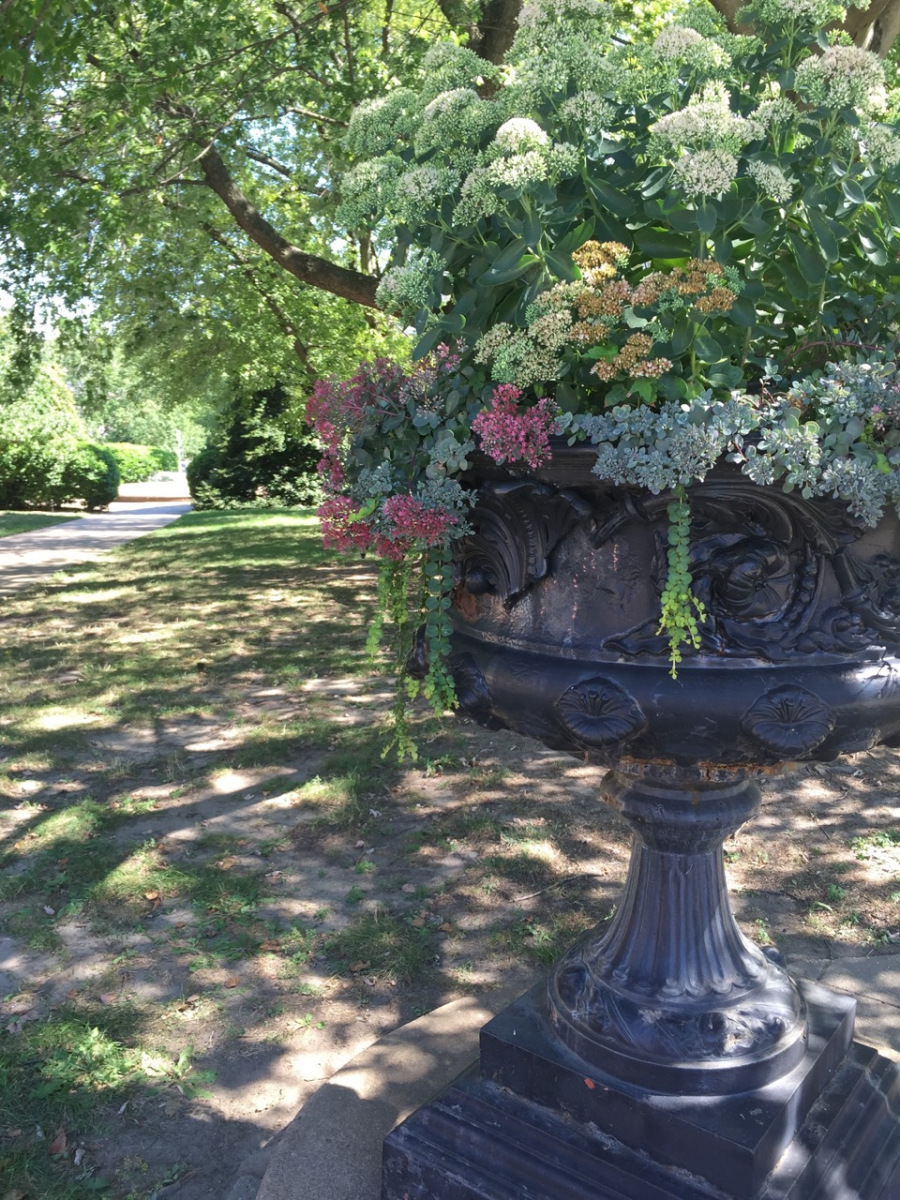 Many of the neighborhood’s largest greenspaces, including the medians on Park Avenue and Eutaw Street, require the coordination of teams of volunteers, as well as collaboration with Rec and Parks, Midtown, and other City agencies to mow grass, repair fountains, and trim trees. Members of the Bolton Hill Garden Club, including Christian Roth, Brian Causey, Mary Consugar, Ellen Joyce, and others, plant urns and take care of plantings on the Eutaw Place median from the 1400 block to the 1900 block, as well as plantings around the bocce court in Sumpter Park—the bocce court was the brainchild of Mary Consugar as well.

John Kyle also organizes volunteers to care for the urns and fountains on the Park Avenue median, and Claudia Sennett helped to restore the brick wall and iron gates in Rutter’s Mill Park between Lafayette and McMechen. The neighbors surrounding the John Street Park created a non-profit organization to restore the fountain there and maintain beautiful plantings there year-round.

Working in the parks fosters a sense of community and working toward common goals. Henri Daniels helped bring the Kappa Alpha Psi fraternity, who organize a variety of events at their Youth and Community Center on the 1200 block of Eutaw Place, on board to help revitalize the median south of McMechen St. Duane Elliott, a KAP member who has helped organize recent park plantings and cleanups, says that their efforts on Eutaw St. are a way to bring chapter members back into the city and is just one of several initiatives they have to focus attention on West Baltimore and other city neighborhoods.

On the edges of Bolton Hill, empty, neglected spaces can attract illicit activity. The Contee-Parago Triangle Park at the southern end of Bolton St., across the street from Bolton Swim and Tennis, was one such location in the early 2000s. With the help of several grants, neighbors on the 1200 block of Bolton St. and Dolphin Alley restored the park.

Maple Leaf Park, on the opposite end of the neighborhood, was actually created as a response to criminal activity. Thelma Harrington worked with Midtown and other city agencies and organizations to raise funds to build a fence along North Avenue. She said, “It was a couple years before we completed the process but this was the beginning of the transformation of a park full of trash and needles to our beautiful green space.”

Parks and People and other greening organizations stress the importance of maintaining urban green spaces to deter crime. Keeping parks clean and attractive encourages the role of “positive users” to deter the undesirable behaviors of “negative users,” whether they are engaged in criminal activity or nuisance behaviors.

So please, help out your park caretakers and look out for our parks. What are their biggest challenges?

Being persistent with city agencies. Finding reliable, dependable volunteers who will show up when asked and water on schedule. Dealing with plant theft (the city does NOT pay for the flowers you see in the parks–more often than not, your neighbors are buying them out of pocket). Finding reliable water sources. Keeping people from dumping bags of personal trash in park trash cans. And perhaps more than anything, keeping dogs (and their waste) out of planting beds.

Christian Roth, who cares for parts of the northern end of the Eutaw Place median, says, “It all is exhausting—I do it because it’s the world I want to belong to.”

Interested in neighborhood greening efforts? Join the Bolton Hill Garden Club or find out about their greening grants at their website.

Working Hard for Our Neighborhood Parks

Halloween Party with a Purpose

Festival on the Hill is Coming

Building Trust, Working Together for Change