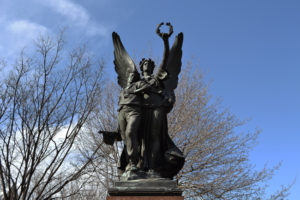 In the wake of the shootings in South Carolina, Baltimore has begun a review of the city’s Confederate monuments, one of which, the “Spirit of the Confederacy,” stands in our neighborhood on Mt. Royal Avenue near Mosher St. Neighbor Eli Pousson, who works for Baltimore Heritage, has posted about the history of these monuments in an effort to understand the city in which the monuments were originally erected.

He found a letter from Confederate veteran Charles T. Crane to then Baltimore Mayor Ferdinand Claiborne Latrobe, published on March 27, 1880. In the letter, Crane strongly disavowed the principle behind the Civil War and efforts to memorialize the Confederacy, writing: “I am unwilling to see erected in the public streets of this city a monument to a dead idea.”

The full letter and some great old photos are at the blog, along with many other fine articles on Baltimore history.