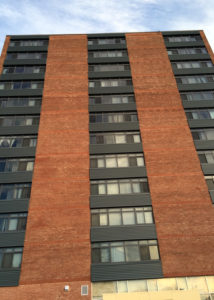 The team renovating the Linden Park Apartments reports good news for 2016: the transformation of the building will soon be complete. As construction winds down, the process of putting things back together and sprucing up the site begins.

In the 3rd and final wing of the building, new apartment construction has been completed through the 8th floor, with 228 of the 266 total units finished. Most importantly, all original Memorial Apartments tenants have now moved in to their final, renovated units. This major milestone fulfilled a commitment to the residents, as well as satisfying a major requirement for the project’s financing.

The few remaining apartments will be completed by the end of March.

Unfortunately, engineers identified structural problems in two wings of the building which will delay completion of the new ground floor offices, located where the porte cochere is now. So, construction will continue on this area until May. However, since most of this repair work is interior, the exterior work, including fencing and landscaping, is still on schedule for completion by the end of March. That is, assuming the weather cooperates.

Now the management team is focusing on spring and summer programs for the residents. Throughout the spring, new facilities will become available to the residents, including game and fitness rooms, a library, a computer lab and a solarium. There will even be a new salon opening in June, which will serve the general public, as well as residents.