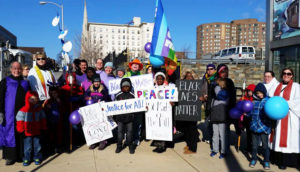 The Episcopal Diocese of Maryland, represented by Memorial Episcopal Church and several other congregations, will march in the Martin Luther King Jr. Parade on Monday, January 16. Everyone is invited to join.

The official launch of the parade is at noon, but participants must be in place by 11:30 am at the State Center elevator for the Metro (Preston St. and Eutaw Place.) Look for Monty Howard, who will be easy to spot in a fluorescent orange fedora. To keep updated on the plans, email him at monthoward@earthlink.net. , or check Memorial Episcopal’s Facebook page.

During the one-mile, downhill march, diocesan participants display messages of peace that are appreciated by spectators every year.

“The march is a lot of fun,” says Monty. “It is also generally the coldest day of the year, and although you can take Metro or other rides back, we generally turn around and walk home. So, it’s important to dress warmly.”

Join in to honor the life and philosophy of Dr. King!