Brief updates on news around the neighborhood:

In case you haven’t seen them, the City installed interpretive plaques on two Confederate monuments, one of which is in Bolton Hill.

In January 2016, a commission appointed by the Mayor recommended that two of Baltimore’s four statues to the Confederacy be removed, while the remaining two receive additions that provide proper context (See Baltimore Sun article for more.)

The Mayor decided that these changes should be completed before she left office, with the interpretive signs installed on her final day. The text for these signs was written by CHAP staff.

The Confederate Soldiers and Sailors monument on Mount Royal Avenue, between Mosher and Lafayette, received the sign below (click to enlarge.) The other that received a sign, the Confederate Women’s Monument, is on West University Parkway.

Brown Memorial Presbyterian’s Reverend Andrew Foster Connors received honorable mention in the Baltimore Sun as one of the Marylanders deserving recognition in 2016.

The Sun highlighted Rev. Foster Connors’ collaboration with other clergy activists in BUILD for their successful negotiation of the expansive Community Benefits Agreement with the Sagamore Development on the Port Covington Project. Read the full Baltimore Sun story here. 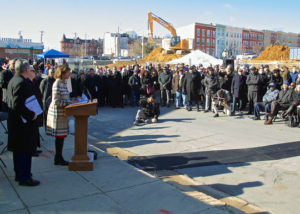 The gathering celebrated the beginning of the demolition that will clear the site for a mixed-use community, with a technology and incubator facility, retail including a supermarket, 300-500 apartments and a health care facility, all in proximity to the John Eager Howard School, which is now under construction.

Read more about the plans for the innovation center in this Technical.ly Baltimore article.

The next monthly meeting of the Neighborhood Coalition for MPN Redevelopment will be Monday, January 23, 7 pm, in the St. Francis Neighborhood Center at 2405 Linden Ave. All are welcome to attend.