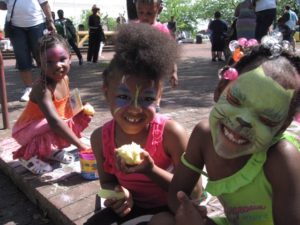 Celebrate the community that unites us, rather than the boundaries that separate us, by joining the fun at the 10th Annual Boundary Block Party, Saturday June 3, from 1 to 4 pm at the Upton Triangle, the corner of Pennsylvania Avenue and Presstman Street.

Organized by No Boundaries Coalition and Jubilee Arts, you can follow the event and RSVP on Facebook to show your support.

The Boundary Block Party brings together residents of Central West Baltimore as one community, including the neighborhoods of Bolton Hill, Marble Hill, Reservoir Hill, Upton, Sandtown, and Madison Park, and Druid Heights.

Started in 2008, the first Block Party was held on the Eutaw St. median south of McMechen, the unofficial but generally accepted boundary separating Bolton Hill from Madison Park and Marble Hill. From the start, the block party set out to encourage more open involvement between the whole 21217 community.

Over the years, it has grown bigger and moved just a few blocks west to the Upton Triangle at the boundary of the Upton, Druid Heights and Sandtown-Winchester neighborhoods.

And the fun has grown too, with live entertainment, music to dance to, grilled food to eat, a community resource fair, and art activities for families. The live entertainment will include Twilighters Marching Band, Brown Memorial Choir, Soulful Sisters, and Dynamic Force, along with others.

Fresh on the Avenue will even be moving their store’s stalls to the park to setup a full outdoor produce market with a large selection of locally grown and organic items.

As they did last year, MRIA’s Social Action Task Force will be organizing a group walk from Bolton Hill over to the Party. This year, they’re meeting at Linden Gazebo at 9:45 am for a morning walk to join the clean up of Upton Park in preparation for the Block Party. Kids and adults welcome – just bring work gloves if you have them.

Plan to make a whole day of it, as Boltonstock 2017 starts afterward at 5 pm—the official after party.