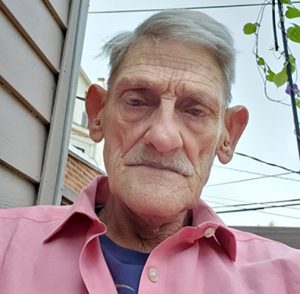 (Neighbors is an occasional series of profiles of people who live in Bolton Hill, aimed at showing the talent and diversity of folks who live among us. Nominations are welcome: bulletin@boltonhillmd.org )

Gary Grimmette, whose father died when he was a toddler and who dropped out of school before reaching his teens, has lived a life that has taken him from the mountain hollows of West Virginia to Michigan to Vietnam to Washington, D.C., to California, Florida, France, Italy, Egypt and lots of other spots along the way. In the jargon of country music, he has been a Ramblin’ Man.

Now he lives in Bolton Hill, for the past year in a roomy apartment in the condominium building that was once the Quaker school on Park Avenue.  On the walls are photos of his family, neighborhood kids whom he considers his godchildren; a photo of the man who sponsored him in AA and led him toward religion and sobriety since 1987; and lots of others.

He has worked construction, lived as a monk for several years, maintained gardens at the White House in the Nixon and Ford years as a National Park Service employee, started and ran a landscaping business in LA and lived for years abroad, picking up work when he could.

At 73, Grimmette is slender, with short white hair and a moustache.  He is mostly retired and says he lives modestly on disability income that stems from his stint in the Vietnam War as a combat medic.  He was injured, diagnosed with PTSD, decorated and says he was offered a purple heart for the service he rendered and injuries he sustained – but that by then, 1968, he had come to see the war as a mistake and regretted his role in it.  “I turned it down,” he said.

“My father was a miner, but he died when I was just a year old, and my mother moved me and my two brothers with her to Detroit,” he said. Life was hard there, and he dropped out of school early to do whatever jobs he could find.  His older brothers wound up working in Ford plants. At 16, Grimmette says he lied about his age with the knowledge of recruiters and joined the Army.

“I’ve had quite a life, lots of ups and lots of downs,” he said.  He considers himself a political radical, independent of parties.  He doesn’t trust the government and has refused to receive the COVID vaccine.  “I trust in the Lord and my immune system,” he says.  He reads The Guardian, listens to the BBC and trusts them and The Associated Press but no other media.  He is opinionated and pessimistic about the country’s future: “It’s not the country I fought for.”

His passion continues to be gardening.  He says he has joined the Bolton Hill Garden Club and helps neighbors maintain gardens in Laurens Street yards.  He also puts time into keeping Maple Leaf Park,  tucked away at the intersection of Bolton and Robert Streets and an alley off the 200 block of Laurens.  “I want to put a fountain back there,” he said.

On the day we met, Grimmette had unplugged his computer and said he was giving up on email, troubled by SPAM and unwanted content he had received.  “You can reach me by phone or by mail, but I won’t be back on email,” he said.  He gets around Baltimore on an electric scooter.