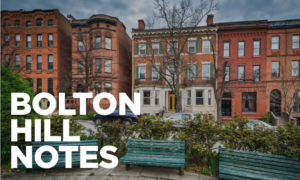 BHCA calls for removal or explanation of 3 public monuments

BHCA’s board this month gave final approval to nearly two years of committee work and recommendations for action on three historic markers on public space in the neighborhood. Without objection, it voted to:

Committee chairman David Nyweide said he would consult with city council member Eric Costello about how best to go forward since public properties are involved.

Bolton Hill has 6,000 new spring bulbs – daffodils, tulips and the like – dozing in tree wells and other public spaces around the neighborhood. Watch for them in April.

The big box store donated the bulbs to BHCA’s busy Greening Committee and volunteers in the community planted them around not only Bolton Hill but also in Madison Park to the west, collaborating with the Madison Park Improvement Association. It was the third consecutive year Home Depot made bulbs and gardening support available.

The Bulletin is designed by Elizabeth Peters. We invite others to help write, edit, provide photos or work the business side. Send suggestions and comments to bulletin@boltonhillmd.org. Thanks to Andrew Dupuy, Tom Hasler, Steve Howard, Paula Jackson, John Kyle, Deborah Morris, Joyce Oliner and Lee Tawney, among others, for advice and contributions. Errors and omissions are the responsibility of the editor, Bill Hamilton.