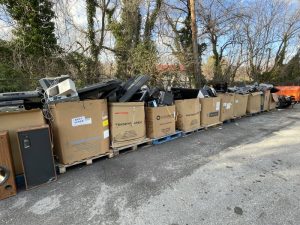 Since all of us have cell phones, laptops, big TVs and the like, it’s not surprising to learn that E-waste is the fastest-growing waste stream in the world; between 50 and 60 million tons of electronic products are produced each year. A quick visit to the Sisson Street solid waste drop-off station seems to support that fact.

But for once, it seems, Baltimore and Maryland are ahead of the pack.

Gov. Robert Ehrlich (R) signed a bill passed by the General Assembly in 2005 to require computer manufacturers who sell products in the state to pay a fee to support recycling. About half of the states have some sort of similar law now, encouraging businesses  to promote e-cycling by companies and households.

Many tech companies have their own recycling programs. Dell and HP will accept old, unusable equipment as trade-ins, while retailers like Staples and Best Buy invite you to recycle through them. Mom’s Organic Grocery in Hampden takes old cell phones. Apple takes theirs back, too. When you Google “recycle old TV” you get several options.

Kaliyah Jordan in the City’s Solid Waste Division at Department of Public Works (DPW) pointed out that all five of Baltimore’s solid waste drop-off centers – the closest is at 2840 Sisson Street in Remington – accept a long list of unwanted electronics, from outdated iPhones, fax machines and broken gaming gadgets to TVs with wooden cabinets and cathode ray tubes. Bolton Hill residents can haul discards there or call Midtown Community Benefits District to remove bulkier electronics.

The catch, of course, is that it all depends on consumer volunteerism and dropping off stuff in a city where many residents have no cars. Hauling recycling on public transit is, well, a challenge. DPW will pick up three bulk items for residents who contact them through 311. DPW slashed ordinary bulk recycling pick-ups a year ago as a “temporary measure” and still seems unwilling to reinstate it. Drive through scruffy neighborhoods and parks and you likely will see old electronics tossed here and there. Someone recently threw a broken laptop out of a car in front of Bolton Square townhouses.

The City pays a regional e-cycling company, E-Revival out of New Jersey, to haul away the stuff from the drop-off centers. Jordan at DPW said they typically haul away a dozen 48” by 48” pallets of broken stuff every couple of weeks.  E-Revival hauls it to its 40,000-foot warehouse in the Morrell Park  neighborhood in southwest Baltimore.

Globally, 75-80% of e-waste is shipped to countries in Africa and Asia, where poor and marginalized communities can suffer health and environmental consequences, according to Eco-Watch, an environmental news center based in Ohio. Eco-Watch says less than 20% of e-waste generated each year is properly recycled, which makes sense if you consider that in the U.S. half the states have no e-cycling requirements.

At E-Revival in Morrell Park, Soni Sunkara is quick to say that they ship nothing overseas and that they focus efficiently on disassembling and recovering about 45,000 pounds of local stuff each month – plastic, circuit boards, wires, glass mixed with lead (“We send it to a smelter to be reused.”), mercury and metals like copper, silver and aluminum. They also service Baltimore County. They ship the different stripped-out products to specialty facilities that repurpose them, he said.

Bulky old TVs make up a disproportionate percentage of the volume, he said, although that volume is slipping as big screens have replaced consoles and laptops overtake desktop computers.

The Sisson Street drop-off center is open every day but Sunday from 9 a.m. to 6 p.m.