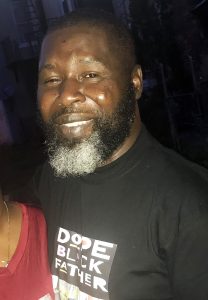 Four carjackings in six months that victimized newspaper carriers in the city is forcing a rethinking, going forward, of how the Baltimore Sun and other print news products will be delivered.

Reginald Scott, 48, has for years delivered the Sun, New York Times, Washington Post and other print publications in Bolton Hill early each morning. On Dec. 7, he was attacked by two armed young men who robbed him and stole his silver Jeep SUV, which was filled with undelivered newspapers. The attack took place in the 1500 block of Bolton Street at 5:48 a.m.

“I’m OK. I’m just waiting to see if they find my truck,” he said three days later. He resumed deliveries in a borrowed vehicle the next day. Scott’s dog, Bruno, who accompanies him most days on his work tour, was in the vehicle but the robbers apparently pushed him out, unharmed. Scott was profiled in The Bulletin last February.

Scott is contracted by AKA Enterprise LLC, which is under contract to deliver newspapers to five city ZIP codes. An AKA Enterprise supervisor said a similar carjacking recently involved another delivery person near Reservoir Hill, while a single carrier was robbed of his car and belongings in the Park Heights area twice – all since mid-summer.

As a result, the company announced on Dec. 11 it would discontinue pre-dawn deliveries and stop on-porch and mail slot deliveries that require the carriers to get out of their vehicles. Scott was taking papers to a Bolton Street residence porch when he was accosted.

Subscribers or neighbors who wish to send Scott a card or otherwise thank him for his efforts can mail to his residence at 1111 Ashburton St., Baltimore 21216, in west Baltimore, where he lives with his young son. Scott has an additional job as a cook at a Cracker Barrel restaurant near BWI airport.

December Delights: Photos of the Season

COVID is lurking in Bolton Hill. Time for a vaccine booster?

Festival of the Hill grosses nearly $29K. Planning begins for 2023