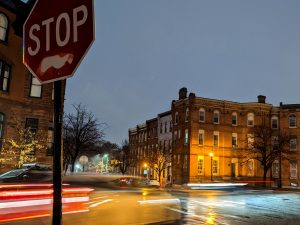 Traffic-calming requests abound, within Bolton Hill and throughout Baltimore generally. In June of this year, after the Baltimore City Department of Transportation had received 40+ individual requests for traffic calming in Bolton Hill, city council member Eric Costello’s staff asked the Bolton Hill Community Association to identify two top priorities for DOT. Liaising with DOT through the Councilperson’s office has proved successful in the past, as it allows communications to be efficiently made with a consistent voice.

Some time ago, a petition was created for traffic calming on Lafayette Ave., and it has around 200 signatures in support.

More recently a similar petition was created for Laurens Street around Arnold Sumpter Park and it is already nearing 50 signatures. These two efforts are cooperative, rather than competitive; addressing both streets at the same time could allow DOT to begin to improve the neighborhood’s interdependent traffic flow as a whole, rather than piecemeal.

It is not too late to sign these petitions if you live in or near the affected areas.

In November, Costello’s office discussed around 30 traffic-calming requests with DOT throughout his District 11. We are expecting an update from his office as to the status of our requests at the BHCA meeting on January 3, which will be held by Zoom.

After these priorities were outlined at the December BHCA meeting, several neighbors expressed concern about speeding traffic on Mt. Royal Ave. The speed limit there is greater than that on North Ave. and on Howard St.—30 mph versus 25 mph. While speed humps may not work ideally for a thoroughfare like Mt. Royal, it’s been suggested that a combination of a lower speed limit along with speed cameras might help. Preliminary discussions with MICA staff indicate they would support traffic calming there, too. For now, however, the priorities are Lafayette and Laurens.

December Delights: Photos of the Season

COVID is lurking in Bolton Hill. Time for a vaccine booster?

Festival of the Hill grosses nearly $29K. Planning begins for 2023