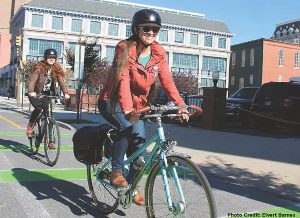 Along Mount Royal Avenue the “streetscape” concrete separated bike lane is to be extended from Lafayette Avenue in front of the MICA Fox Building, where it currently stops, to North Avenue, along the northeast side of the street. The extension will be built this summer and is intended to provide “low-stress” connections to neighborhoods south of Mount Royal.

Along Madison Avenue the “bicycle boulevard” goals are to extend connections to and from Reservoir Hill from just north of and crossing North Avenue to the north side of Eutaw-Marshburn school. Those additions also are planned for the summer.

Planning for the creation of a separated bike lane corridor along Eutaw Place from Druid Hill Park to Dolphin Street has been funded, with construction funding scheduled for FY2023, That plan envisions a two-way cycle track aligned on a northeast path from MLK Blvd to Dolphin, with two one-way lanes, then Dolphin to North Avenue along the Eutaw Place median, again with separated one-way lanes and, finally, from North Avenue to Druid Hill Lake Drive with one-way pairs on Eutaw and Madison protected by parking lanes.