The weather on Saturday June 2 was horrible, especially right around 5 p.m., when Boltonstock was scheduled to start. The rain poured and the wind blew.
But thanks to the generosity of Memorial Episcopal Church and a lot of last-minute work by organizers Jessica Wyatt and Chas Phillips, the show went on as an indoor festival in the church’s main sanctuary. And the smaller but very enthusiastic crowd of attendees loved it.
Starting at around 3 p.m., volunteers worked feverishly to transform the church into a concert hall, setting up food and beverage stands on either side of the entrance, and a stage in front of the altar, with a kids’ area to the right and community tables on the left. There was even lots of room for a dance floor, which was well used over the course of the evening.
Classical Revolution Baltimore opened the festival, giving a new twist to classical music by combining classical instruments with beatboxing and other present-day touches. The group encourages new people to get into classical music by organizing free classical music performances in unlikely venues such as bars, cafes, and parks—and at Boltonstock.
When the Ursula Ricks Project hit the stage, the party really started. Ricks captured the ears and hearts of the audience with two great sets that had everyone dancing the rain away. Many people voiced the hope that Ursula would return again next summer when Boltonstock returns outdoors in Sumpter Park.
Despite the weather, many community partners had tables setup near the stage where they explained the work they do in the 21217 area, and how others can get involved. The organizations included Corpus Christi Parish, Communities United, The Garden Church, Jubilee Arts’ Youth in Business Program, Kappa Alpha Psi- Kappa League/Guide Right Program, Little Leaves at the Rawlings Conservatory, No Boundaries Coalition, and Wide Angle Youth Media. 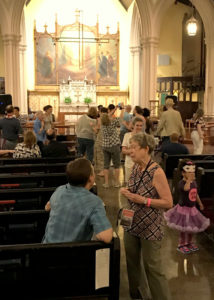 During the last-minute rush to move everything indoors, the organizers set a goal of $1,200 to break even and cover costs. The final tally blew past that goal, making a bit of a profit that will be set aside for producing the 2019 event.
“The 21217 community showed up,” said Chas Phillips. “The fact that Boltonstock covered costs and made a little bit of money for future events is a testament to this neighborhood’s generosity and spirit.”
Many people deserve thanks for making the day a success, including Peabody Heights for donating a keg of beer, and The Wine Source, for providing the wine at cost, with free delivery and generally great service.
Neighborhood volunteers included Mare Consugar, Rob Helfenbein, Don Palmer, Andrew Parlock, Linda Rittleman, Lisa Scott, Carol Shrewsbury, Peter Van Buren, Chris Whisted (with Little Havana), and Alisha Wolf. Many other folks also helped during the event.
A huge thank-you goes to Memorial Church for not only allowing the festival to use its space last minute, but also for helping everything run smoothly. Without this incredible generosity, Boltonstock 2018 would have been DOA. Instead, it R-O-C-K-ed!