For the first time in several years, the fountains are sparkling all across Bolton Hill. Up and down Eutaw Place and Park Avenue, and in the lush environs of the so-called “Lion Park” and John St. Park, the waters are flowing.
Bolton Hill’s fountains are some of the neighborhood’s most treasured features. But it takes a lot of conscientious oversight and cooperation between Bolton Hill neighbors, clubs and associations, and city agencies to keep them running.

The fountains in the medians of the 1600 and 1700 blocks of Park Avenue have been maintained and cared for for many years through a cooperative effort of the City and a host of committed neighbors.
In the past year or so, the City has provided new motors to run the fountains and new LED lights. The Department of Recreation and Parks’ Kermit Taylor has been steadfast in his determination to support the work on these and other neighborhood fountains.
Near-daily maintenance to clean the fountain basins and maintain appropriate water levels is provided by neighbors who view the medians and the fountains as their front yards. This year, when it became clear that the fountain basins needed to be scraped and re-painted, a team of neighbors including Gary Schilling, Bill Heaps, Peter Satten, Chris Engler and John Kyle got together to power wash them to remove chipping paint and then to repaint them.

Meanwhile, in the green space on the 300 block of W. Lanvale affectionately known as Lion Park, the fountains are flowing again after three years of persistent effort on the part of City agencies, the Atrium Association, City Council Member Eric Costello, and Justin Lane, Chief of Staff of City Council District 11.

After having to bring in outside experts for some of the refurbishment, City workers finalized the installation of new motors, new flood lights, new plumbing and new electrical systems. It’s especially wonderful to see the fountains’ flood lights, which have not been operating for at least a decade, illuminating the gently rippling waters at dusk.
Lion Park is owned by the City, managed by the Dept. of Recreation and Parks, and leased to The Atrium Association. Over the past two years, it has undergone a major refurbishment with brand new benches, new street lights, repaired and repainted street lights, refurbished gates and fences and redesigned landscaping throughout.

The most newly restored fountain on the Eutaw Place medians is on the 1800 block, installed several years ago with funds raised by neighbor Ellen Joyce. It’s solar-powered! But it—and the surrounding grounds—still require maintenance, now undertaken by a coalition of neighbors and workers from Midtown and the Dept. of Recreation and Parks.
The same is true for the oldest fountain in the park, the Gunther fountain (called the “swan fountain” by many even though it actually features a goose on top), which dates from the nineteenth century. Parts of the structure—including the bird on top, which was originally a bird with a putti, or cherub, astride its back—were replaced in the twentieth century. The whole thing was repaired and repainted last year through the efforts of Christian Roth and the Bolton Hill Garden Club and City Council President Jack Young, and it looks beautiful this summer. 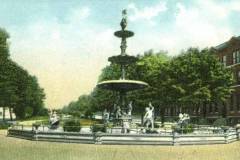 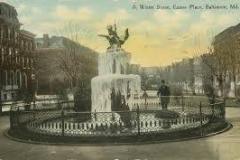 [Click a card to see caption]
The Francis Scott Key Monument and fountain, regilded and repaired in the 1990s through a restoration organized by neighbors Lynn and Bob Pellaton, is also historic. Unfortunately, it’s one of two Eutaw Place fountains that currently is not operating.
It has been much photographed—and much maligned—since its erection in 1911.
President Bill Clinton attended the monument’s reopening after it was restored. Recently, however, it was vandalized with red paint during the aftermath of the removal of Confederate monuments (Key, who wrote the national anthem, was also a slaveholder), and subsequently damaged by a well-intentioned neighbor who attempted to power wash the paint off the marble base.
The monument is currently fenced off while restoration efforts continue.
The Centennial or Children’s Fountain also is not running—because it no longer exists. It used to sit on the 1600 block of Eutaw Place, in front of what is now Eutaw-Marshburn Elementary school. The fountain previously had been installed at the Philadelphia Centennial Exposition in 1876 (thus its name) and was donated to Eutaw place. Sadly it fell into disrepair and was demolished.
Another fountain that calls for restoration is the fountain in Contee-Parago Triangle Park on the south end of the neighborhood. Built in the 1970s, the modern fountain with brick reflecting pool is surrounded by benches, a circle of mature willow oaks, and a circular brick wall.
Perhaps some civic-minded neighbor will undertake another restoration effort to add to the crown jewels of Bolton Hill—its fountains.