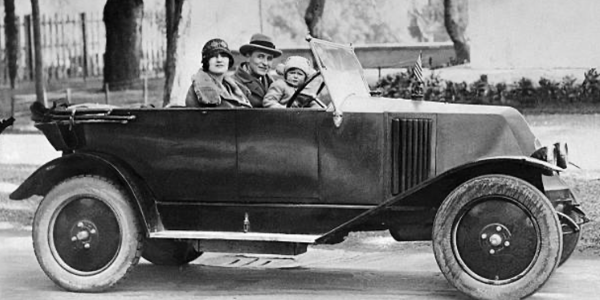 “So we beat on, boats against the current, borne back ceaselessly into the past.” – Nick Gatsby

Although he spent most of his early years in St. Paul, MN, the famous Jazz Age author F. Scott Fitzgerald has strong biographical connections to Maryland, and more specifically, strong personal connections to our Bolton Hill neighborhood.  Moreover, Fitzgerald ancestors can be traced back to a number of colonial families: Francis Scott Key was his second cousin, thrice removed.

In 1920 Fitzgerald published his first novel, This Side of Paradise, in an effort to win the love of Zelda Sayre, and that book not only won her hand, but also received critical praise and financial success.  That success was even more firmly established with the publication in 1925 of the novel universally considered his greatest work, The Great Gatsby.  Zelda and Scott became a Roaring Twenties celebrity couple who behaved much like today’s young stars who are bestowed with riches and adulation but lack the self-control to handle notoriety.

By 1930 Zelda had suffered the first of her multiple breakdowns.  Fitzgerald wrote to his first editor, H.L. Mencken, asking for advice, and Mencken  suggested the Phipps Clinic at Johns Hopkins.  Zelda was admitted in 1932 and accompanied by their young daughter Scottie, the Fitzgeralds rented a cottage called La Paix from Baltimore architect Bayard Turnbull on the grounds of what is now St. Joseph’s Hospital in Towson.  When he came to Baltimore, Scott was drinking heavily and was in severe financial straits because he hadn’t published since Gatsby. He was struggling to finish Tender is the Night, which he hoped would rescue him from debt and re-establish his literary reputation.

Mencken and his wife, the writer Sara Haardt, socialized with the couple. In a diary entry Mencken describes them: “Scott . . . and his wife were here to lunch yesterday . . . the poor girl went insane in Paris a year or so ago and is still plainly more or less off her base. She managed to get through lunch quietly enough, but there was a wild look in her eye, and now and then she showed plain signs of her mental distress.” Fitzgerald, he added, “is a charming fellow, and when sober makes an excellent companion. Unfortunately, liquor sets him wild and he is apt, when drunk, to knock over a dinner table, or run his automobile into a bank building.”

A fire at La Paix, caused by electrical problems but falsely attributed by many to Zelda, led to a canceled lease, and in August 1933, the Fitzgeralds moved to 1307 Park Ave in Bolton Hill, not far from the monument to his famous ancestor, Francis Scott Key, on Eutaw Place. This would be the last home Scott and Zelda shared.

Zelda spent her weekdays hospitalized at Sheppard and Enoch Pratt Hospital in Towson.  Her health improved and she came home and took painting classes at Maryland Institute College of Art.  A friend of Scottie spoke about playing with her on Park Ave where Zelda would fix snacks for them.  Zelda also dabbled in the literary arts, writing an autobiographical novel, Save Me the Waltz, and a play called Scandalabra, which was produced by Baltimore’s Vagabond Junior Players in the summer of 1933.  For almost five years, Baltimore would be the most stable home the little family would ever have.  Unfortunately, Zelda’s mental illness continued to worsen.

While living on Park Avenue, Scott had a number of escapades that illustrate his eccentric behavior.  According to neighborhood historian Frank Shivers, one night on his way home, a drunk Fitzgerald jumped out of a car as it approached the Francis Scott Key monument and hid in some nearby bushes. When the driver (a young Garry Moore, who later became a TV star and who lived for a time at 1434 John Street in Bolton Hill) asked what he was doing. Fitzgerald replied, “Shhh! I don’t want Frank [i.e. Key] to see me this way!” Moore stood in front of the monument to distract “Frank” while the drunken Scott slipped away.

On another occasion, Scott threw a Christmas party for his daughter, Scottie, at the Belvedere Hotel, a favorite Fitzgerald hangout.  One of Scottie’s friends, described him as “not . . . loud, or angry; he was just bleary-eyed, tottering and silly, and to make matters worse he insisted on dancing with some of the girls, who looked scared or embarrassed, while others giggled behind his back.”

In October 1935, Fitzgerald left the Park Ave house and moved  with Scottie to the Cambridge Arms Apartments just opposite Johns Hopkins University and transferred Zelda to a North Carolina hospital.  Shortly after, due to rent trouble, he gave up that apartment.  After a brief residence at the Stafford Hotel in Mt. Vernon, he moved to Hollywood to work as a screenwriter and attempted to finish a novel, The Last Tycoon. There he began a relationship with gossip columnist Sheilah Graham, and in 1940 he died of a heart attack at 44.  Zelda tragically died in a fire at the North Carolina Hospital in 1948.

Fitzgerald once wrote, “I love Baltimore more than I thought— it is so rich with memories— it is nice to look up the street and see the statue of my great uncle (sic) and to know that Poe is buried here and that many ancestors have walked in the old town by the bay. I belong here, where everything is civilized and gay and rotted and polite. And I wouldn’t mind a bit if in a few years Zelda and I could snuggle up together under a stone in some old graveyard here. That is really a happy thought and not melancholy at all.”

Scottie, who attended the Calvert School and then Bryn Mawr, long considered Baltimore her hometown and married a Baltimore man, Jack Lanahan, and regularly visited the city for all the holidays.  She clearly loved both her parents and declared her time in Baltimore a wonderful childhood, but her later statement probably summed up how many felt about Scott and Zelda: “People who live entirely by the fertility of their imaginations are fascinating, brilliant, and often charming, but they should be sat next to at dinner parties, not lived with.”

Today, Fitzgerald’s time in Bolton Hill is memorialized by  a blue plaque at 1307 Bolton Street and F. Scott Fitzgerald Park at the southeast corner of Bolton and Wilson Streets.