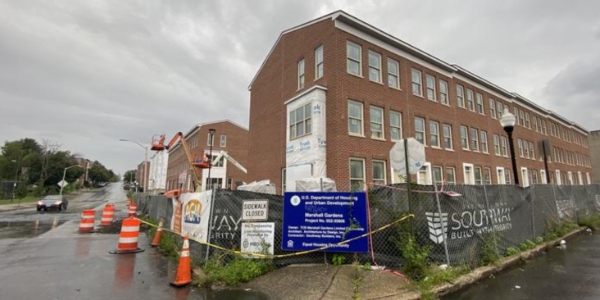 Residents of nearby Madison Park and Marble Hill have enlisted City Councilman Eric Costello to mediate conversations with the Boston-based owner and non-profit redeveloper of the 207 units that make up Pedestal Gardens, the aged former public housing complex on Eutaw Place’s west side at McMechen Street.

Neighborhood residents are concerned that the mixed-income development planned by The Community Builders and supported by the City allocates too many units for low-income residents to make remaining units attractive at market rates.  If that happens, unrented units also likely would become subsidized for more low-income tenants.  They would also like to see opportunities for homeownership.  The first of four phases of the project now underway will replace long-neglected housing with 27 new apartments and 60 townhouses.

At issue is the non-profit developer’s plan that reserves 33% of the new units for Housing Choice Vouchers for families earning make less than 40% of the average median income (AMI) for the surrounding area; 33% for “workforce” housing, which locks in rates for renters making up to 50% of AMI; and 33% at market rate.  The Baltimore Business Journal reported extensively on the project recently.

In recent years Pedestal Gardens residents have had to cope with drug dealing and other criminal activity.  In 2018 a leader of the “Pedestal Gardens Gang”  was sentenced for two murders and extensive fentanyl and heroin distribution charges.  The gang ran its enterprise from an apartment in the 300 block of McMechen Street, federal and local prosecutors said.