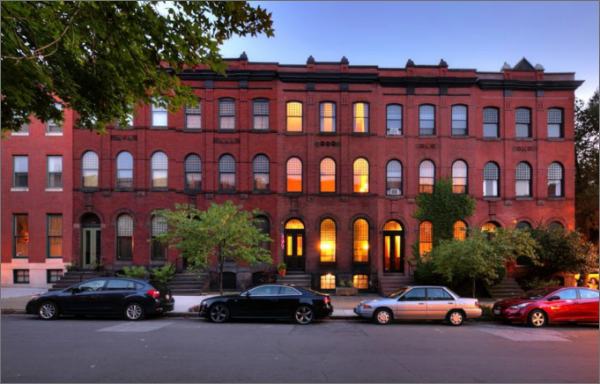 A bill now pending before the city council would change residential zoning to eliminate off-street parking space requirements when owners of single-family residences decide to cut them up into two or more apartments. With on-site parking generally not available on a typical rowhouse lot, the existing zoning restriction effectively limits carve-ups of row homes. Bolton Hill and other neighborhoods in central Baltimore have relied on off-street parking requirements to avoid having too many of their large single-family row homes carved into multi-unit buildings.

Depending on one’s perspective this legislation is:

An effort to make the city less car-centric and encourage greater reliance upon public transit.  (The bill also would prohibit the construction of additional gas stations in the city.)

A giveaway to absentee owner/developers of large and historic residences, since cutting up and renting out units within them is more lucrative than keeping them intact as single-unit residences.

A way to expand housing stock in desirable neighborhoods and perhaps encourage more home ownership if the units are created as condos instead of rentals.

A means of further restricting homeownership opportunities in neighborhoods where most residents live as renters.

A threat to the architectural character of today’s Bolton Hill.

Several central Baltimore neighborhood associations have suggested that Bill 20-0561, by northeast Council member Ryan Dorsey and East Baltimore’s Shannon Sneed, should be amended to preserve scarce parking and discourage additional absentee investors.  At BHCA’s September board meeting, board members and residents considered the issue in a lively and lengthy discussion.

At issue was whether BHCA should join like organizations from Charles Village, Greenmount West, Madison Park, Reservoir Hill and Mt. Vernon in requesting a carve-out in the zoning code to protect buildings with less than 4,500 square footage from unwanted development.  The proposal would allow owners to add one apartment unit to a single-family home without off-street parking requirements but not three or more units.  The proposal also requires that if converted buildings go unoccupied, they would have to revert to a single-family unit.

One-time family-owned rowhouses and old mansions in Mt. Vernon and some parts of Bolton Hill have long been converted into small apartments and student housing.  Although Bolton Hill continues to have many larger single-family houses, including some that have been restored from earlier cutups, only about 25 percent of the residents of the neighborhood today are homeowners.

It is not clear when the council might consider the Dorsey-Sneed bill.