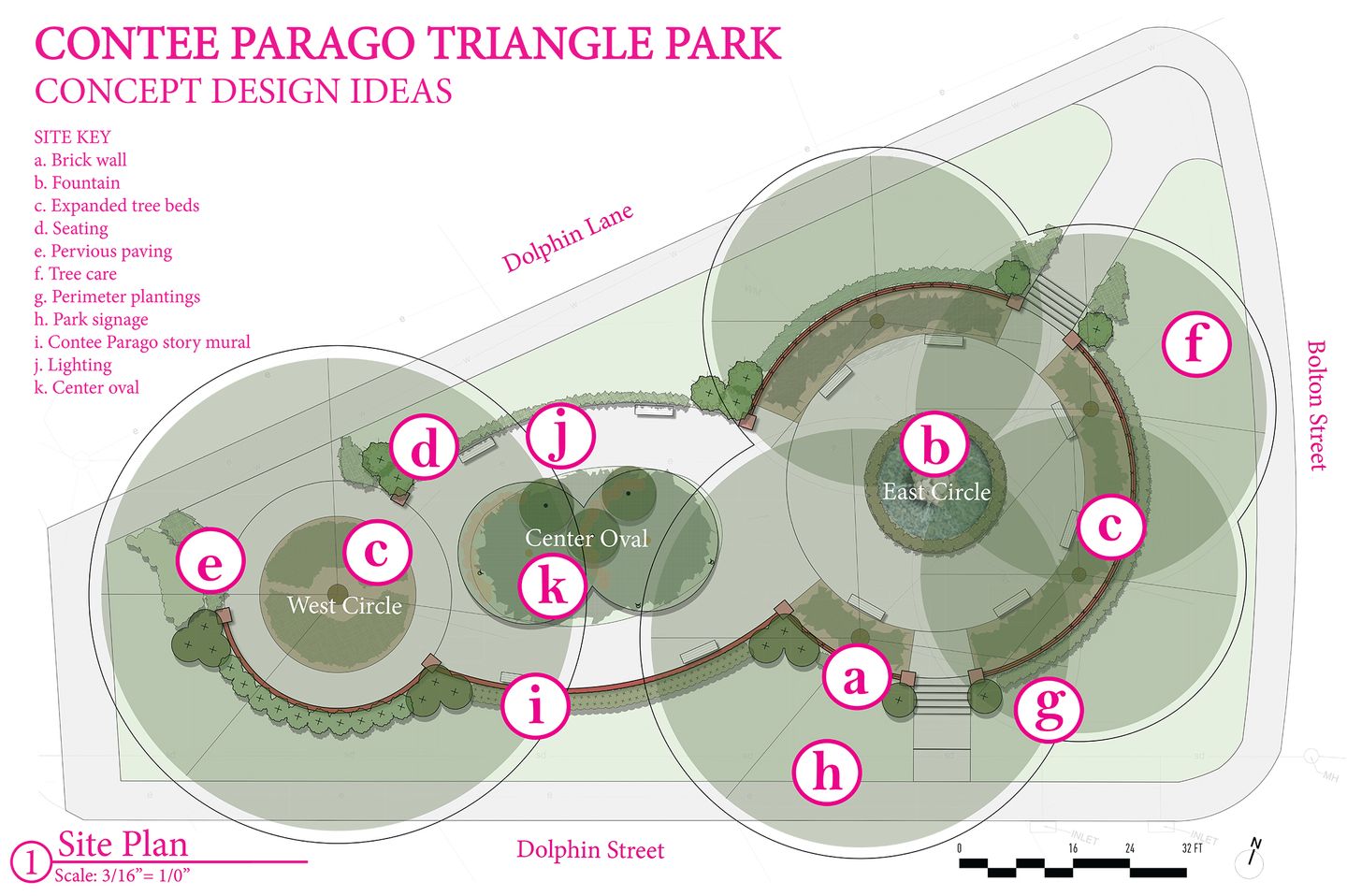 Plans are underway for a major renovation of Contee-Parago Park, at the southern end of the neighborhood at Bolton Street between Dolphin Street and Dolphin Lane. The park is celebrating its 50th anniversary next May.

The park site was cleared during urban renewal in the 1960s. A group of Bolton Hill neighbors organized to build a park, and decided to name it after two “good neighbors,” as a May 1971 Baltimore Sun article described them: Edward William Parago, Sr. (1898-1983), a postal worker, and William Gailes Contee (1891-1987). Both had lived on Dolphin Lane, on the north side of the park, since the early decades of the 20th century.

Very possibly the first city park to be named after Black Baltimoreans, it has historically served as a gathering place and social space for African American residents, who gathered in the park daily to discuss politics and the news.

Mr. Parago was born in the neighborhood and had lived in the house at 234 Dolphin Lane since 1908. His grandson, Reese Culbreath, and his family still reside there, qualifying it as a Baltimore Centennial House, meaning that it has been occupied by the same family for over 100 years.

The park has a striking design featuring intersecting paved elliptical areas, curved brick border walls, and a minimalist fountain. In the 50 years since it was built, the five willow oaks that were planted as part of the park design have matured and now provide glorious spring and fall color and abundant shade.

For many years Mr. Contee turned on the fountain for neighborhood children to play in during the summer. Restoring the park will help continue neighborhood revitalization efforts in the entire Mount Royal area in the spirit of the park’s celebration of the “good neighbors” after whom it was originally named.

The proposed design, provided by a Neighborhood Design Center grant from the Maryland-DC-Virginia chapter of the Association of Professional Landscape Designers, preserves the main design elements of the park, but will replace portions of the brick wall with a more open iron fence-and-brick-pier construction, remove portions of pavement, expand tree wells, and install new planting beds around the fence perimeter. A new, recirculating water feature to replace the fountain is also in the works.

The goal of the redesign is to preserve tree health, increase park visibility, emphasize its historic features, and have a positive environmental impact by reducing stormwater runoff and creating habitat for urban wildlife.

The design is currently being finalized and work on renovation is slated to begin this fall, in advance of a 50th anniversary rededication and celebration in May 2021.

The designs are available online to view here.

Bolton Hill Community Association is supporting the renovation of the park.  If you care to donate to help make it happen, send a check payable to BHCA and make it for “Contee-Parago” in the memo line.  Mail it to J. Cole at 1203 Bolton St., 21217.  If you can volunteer to help, email Jean Lee Cole.  Send a note to that same email to receive occasional updates.