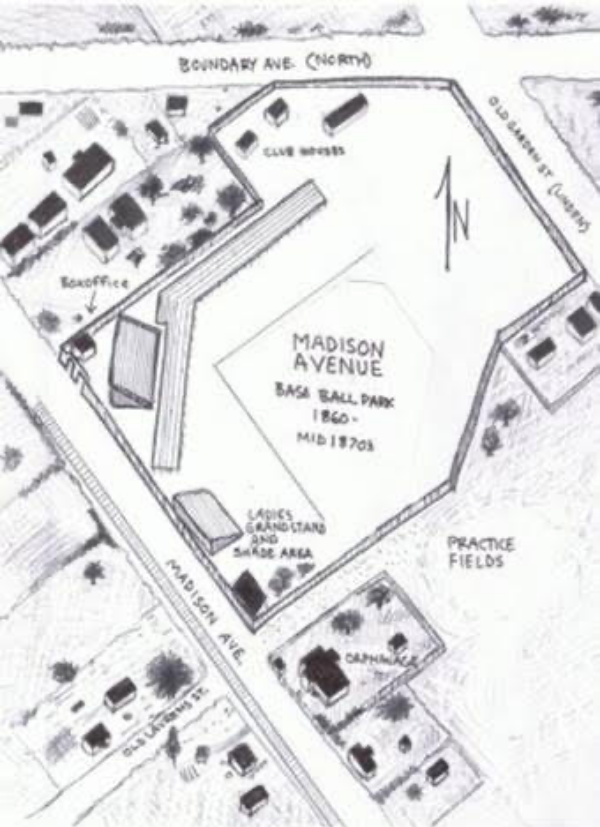 In a time when many surely miss the opportunity to go to Oriole Park at Camden Yards this summer and watch our Orioles engage in our national pastime, it seems like a good time for the baseball-starved fan to reflect on the rich history of baseball in Baltimore. Among the abundant historic baseball sites in the city, there are two special ones here in Bolton Hill.

The first is the Madison Avenue Grounds.  This ballpark was erected by the Waverly Call Club in 1860. It was Baltimore’s first enclosed ballpark. It had stands to seat the fans and player clubhouses. The grounds served as the home ballpark for the Marylands and the Pastimes and was rented out to several other visiting teams. Many games were played there during the 1860s and 1870s.

The ballpark was the site of a game featuring the famous Cincinnati Red Stockings team, one of the first teams to publicly declare itself a professional team. They went around the country playing all comers — amateur and professional. They won all 57 games (including exhibitions) that were played on this tour, and at the Madison Avenue Grounds they beat the Marylands Baseball Club of Baltimore 47-7 on June 24, 1869. The game was attended by an astounding (for the time) 4,000 people, and one local paper noted that the crowd included more ladies than had ever witnessed a baseball match in Baltimore.

Many baseball historians consider the National Association of Professional Baseball Players (aka The National Association) to be America’s first professional baseball league. In the first year of this league on July 8, 1871, the Washington Olympics played the Fort Wayne Kekiongas at the Madison Avenue Grounds. Though based in Indiana, the Kekiogas had a roster that included eight players born and bred in Baltimore.

So where was this historic ballpark located?   It was bounded on the west side by Madison Street, the east side by Garden Avenue (later called Linden Avenue), and the on the north by Boundary Avenue (later called North Avenue). The center field wall ran along what is approximately where the main path runs in Sumpter Park today. If you stand in the middle of that walkway and look west towards Eutaw Street, you would be at the extreme end of centerfield and looking towards second base and home plate. First base would have been located approximately where Eutaw Street is today (south of Laurens street). Third base would be to your right on Eutaw near Robert Street.

The other historic baseball location in Bolton Hill is the location of the home of Hall of Fame manager Edward “Ned” Hanlon, which was  located at 1401 Mt. Royal Avenue (the northeast corner of West Lafayette and Mt. Royal, where the current MICA Bunting Center is located).  The home served as the meeting place for many famous baseball personalities.

Beginning in 1882, Hanlon played twelve years in the National League as a centerfielder, primarily with the Detroit Wolverines. He played in 1,270 games, had 1,318 hits, and he stole 329 bases in the last six years of his career (for the first six years, this stat was not kept). But it was his feats during a twenty-year career as a manager that led to his election into the Baseball Hall of Fame in 1996. Hanlon managed the Pittsburgh, Baltimore, Brooklyn, and Cincinnati clubs and during that time he won 1,313 games as manager and led his teams to five pennants and two Temple Cup Championships (a precursor to the modern World Series).

Nicknamed “Foxy Ned” and “The Father of  Modern Baseball”, Hanlon revolutionized baseball  by devising or popularizing a type of baseball that became known as “inside” or “scientific” baseball that featured an aggressive in-your-face game of hit and run, expert bunting, the “Baltimore chop”, the squeeze, and innovations such as having the pitcher cover first base on balls hit to the right side of the infield.

Hanlon had five children and lived with his wife in this home for over 30 years. His son Joseph died in World War I, and Hanlon Park in the city is named after him. In 1916 Ned began service on the City Parks Board until his death in 1937 at the age of 79. The funeral service was held at Corpus Christi Catholic Church, across the street  from his home. Hall of Famers Connie Mack and  Clark Griffith were honorary pall bearers.

About five miles west from Bolton Hill, Ned Hanlon resides with his family in the New Cathedral Cemetery. Resting near him there are three of the Hall of Fame players that Ned coached on the old Orioles–John McGraw, Wilbert Robinson, and Joe Kelley. New Cathedral has more Hall of Famers than any other cemetery in the country.

Hanlon is credited with instituting the orange and black colors for the Orioles.