Who could imagine that you could turn an evening’s worth of chili into over $3,500?

“On behalf of the Mount Royal School, we would like to thank the MRIA and local community for your amazing support in helping us send students to North Bay Outdoor Adventure Trip,” said Principal Job Grotsky.

“Because of your generous support,” he continued, “every sixth grader wishing to go is now able to. This is over 60 students afforded the opportunity to learn about the restoration efforts to save the Chesapeake Bay.”

The overwhelming success of the event, far surpassing the committee’s goal of $2,000, was due to the strong efforts of the seven committee members, Erin and Phil Cox, Hannah Logue, Powell Perng, Marjorie Forster, Lorrie Caudle and Barbara Francis. 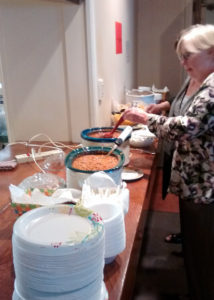 Voicing immense gratitude to all who attended or donated to the cause, Barbara Francis said, “The success of this event was a reflection of the neighborhood’s enthusiasm for and commitment to strengthening the relationship between Bolton Hill and our local schools.”