They came, they dug, and they played with worms, creating a perfect educational field trip for 30 students from neighborhood schools.

On Friday, October 6, students from Eutaw-Marshburn Elementary, Midtown Academy and Mount Royal Elementary/Middle participated in a hands-on community greening project. In the process, they learned about the value of healthy trees and helpful stormwater mitigation practices.

When students and teachers arrived for the tree pit expansion event, the BGE bucket truck crew was already on site with their cherrypicker, always a fascinating machine for kids—not to mention adults. After a demonstration, the crew joined the group to recondition the tree pits with topsoil, LeafGro and mulch. The “toppers” for the kids included planting the liriope spicata, and introducing wiggly cultivators (i.e., earthworms) into the soil of the pits. 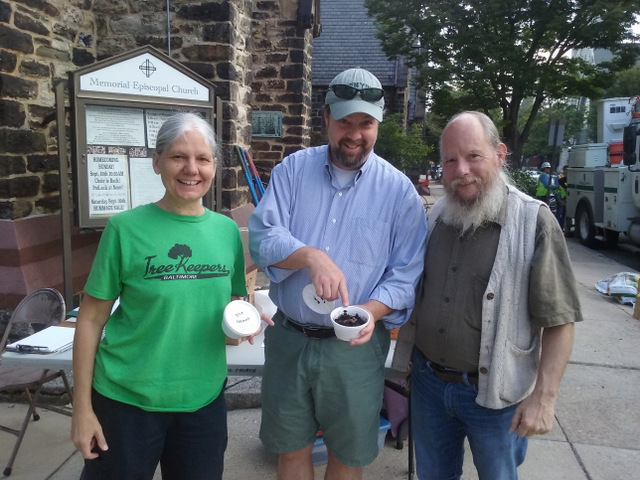 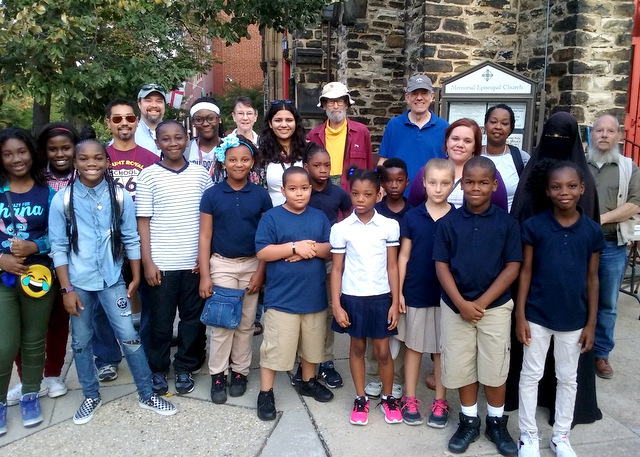 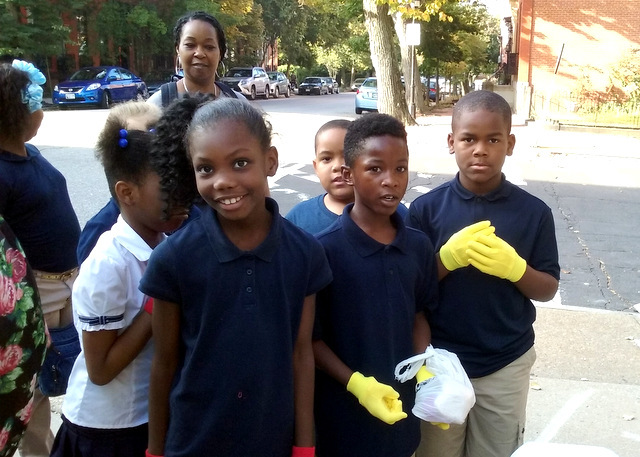 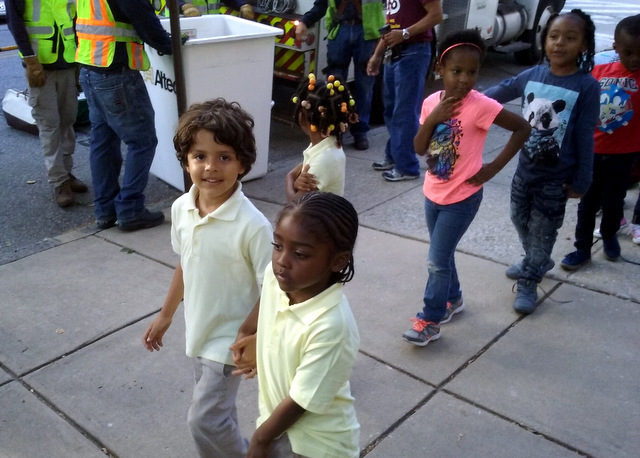 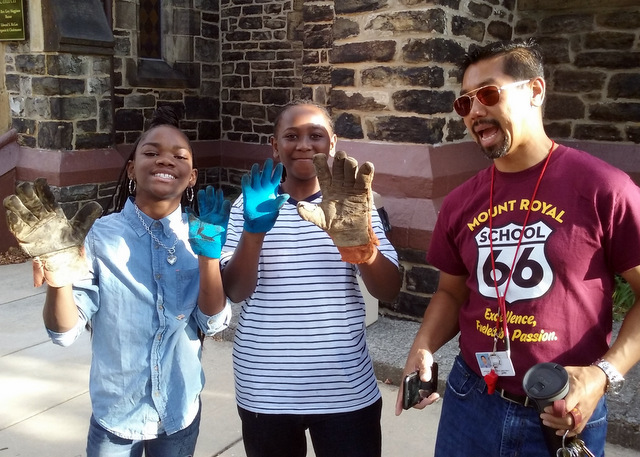 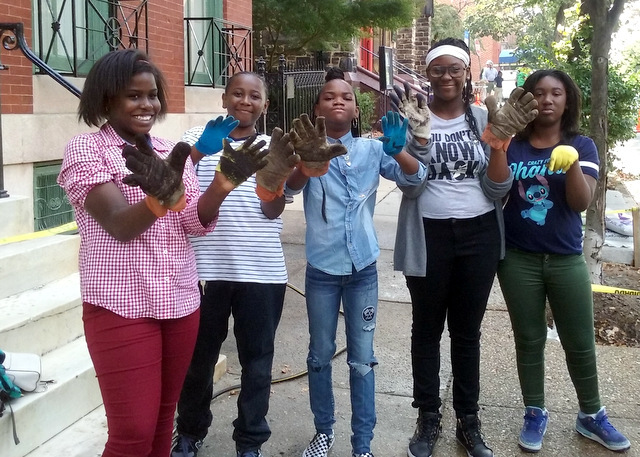 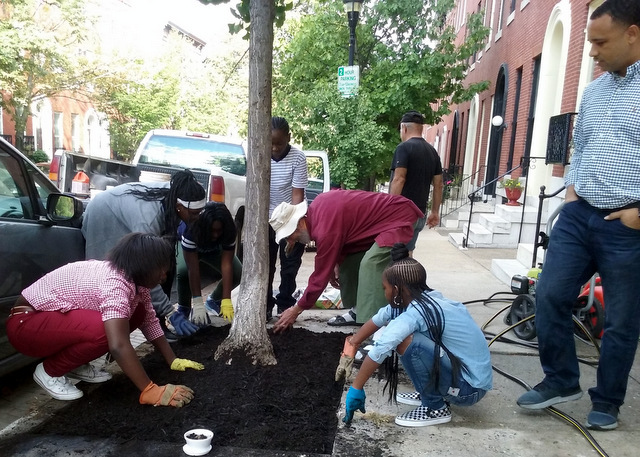 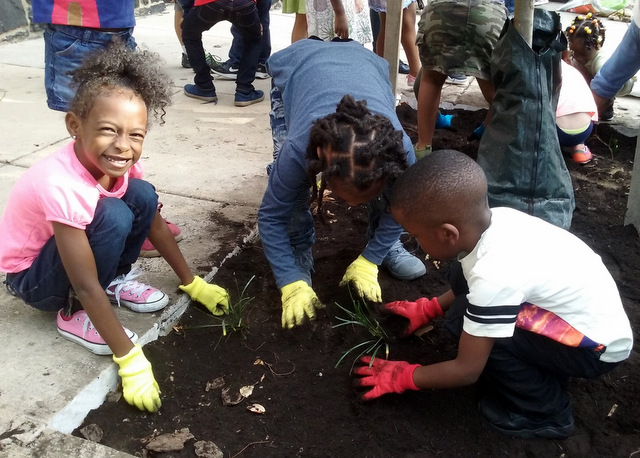 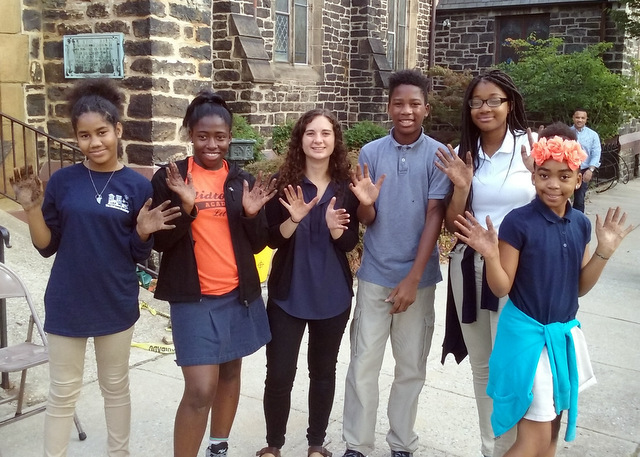 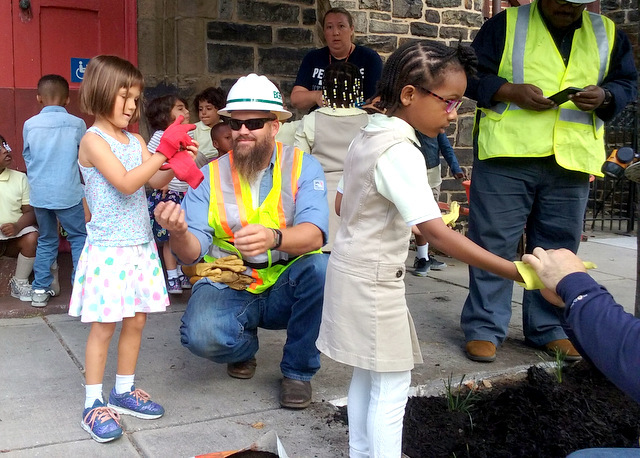 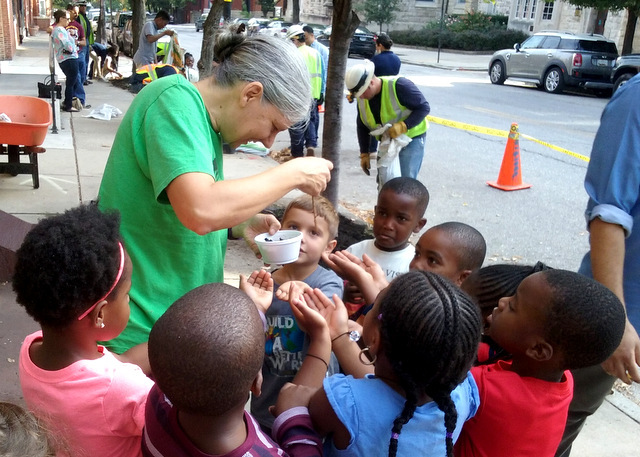 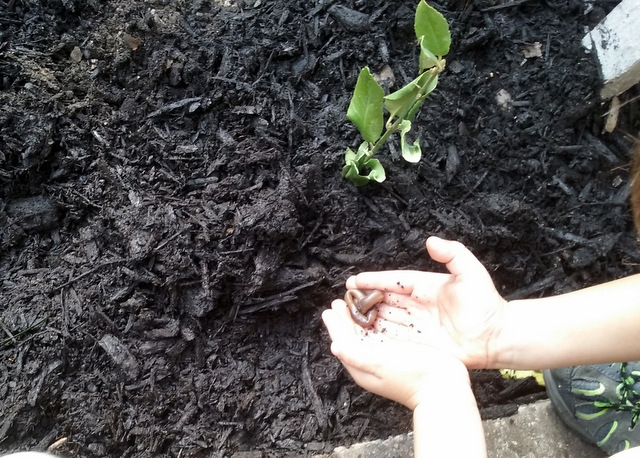 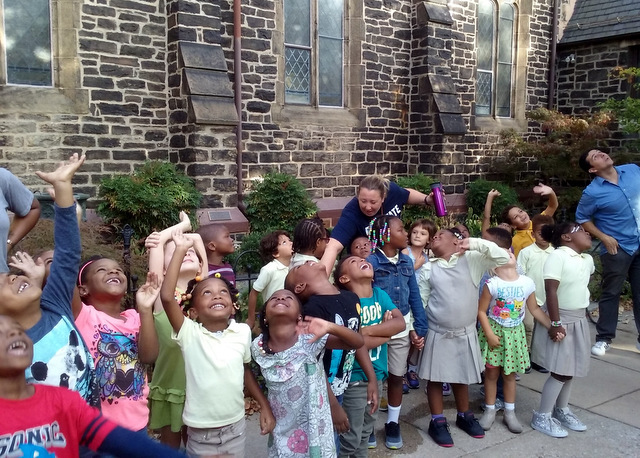 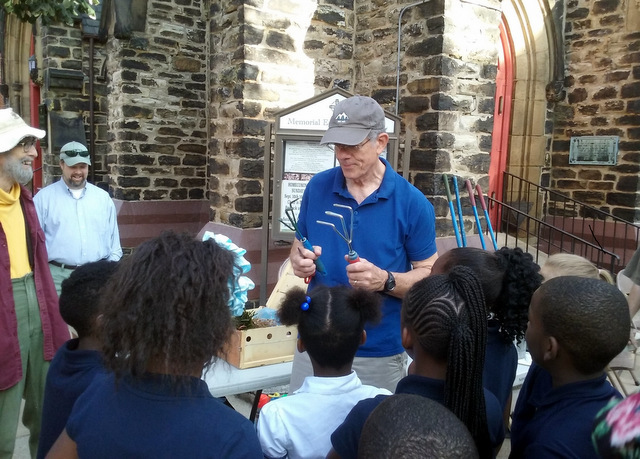 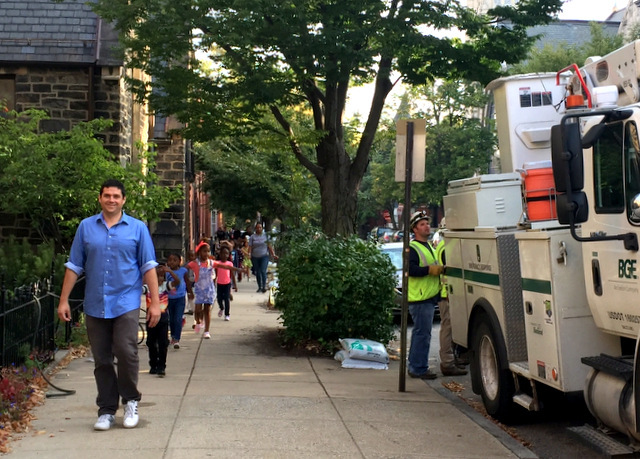 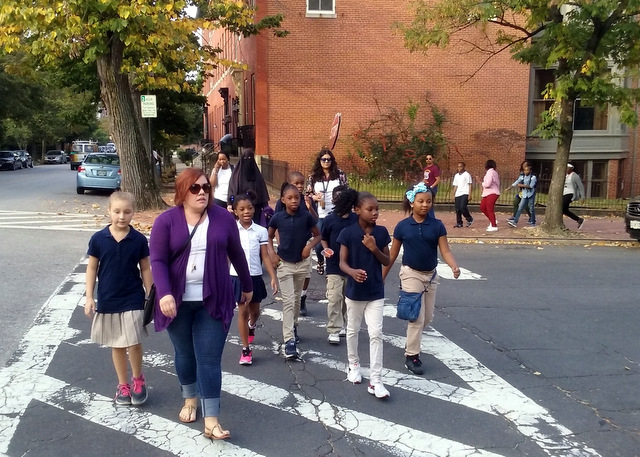 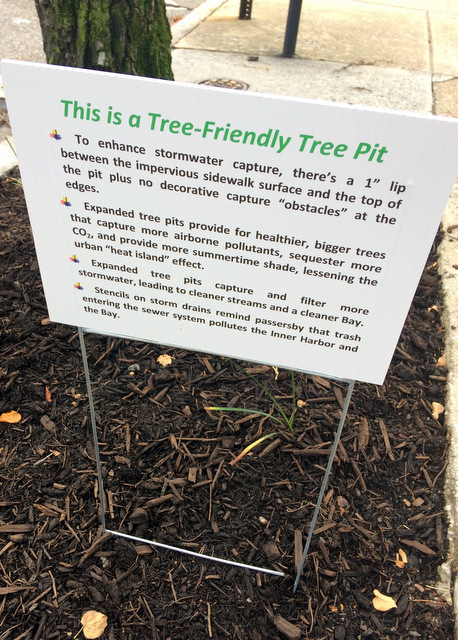 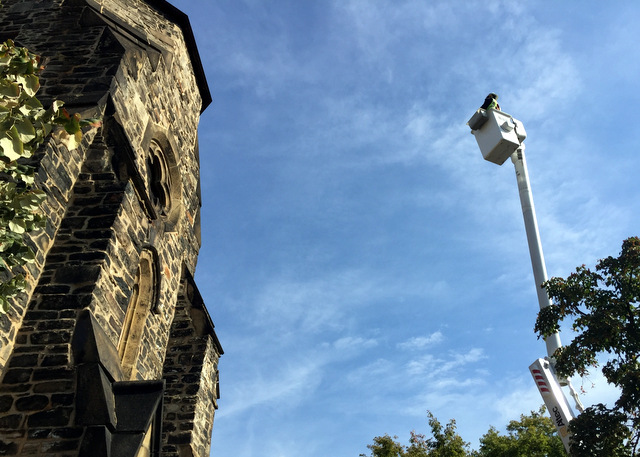 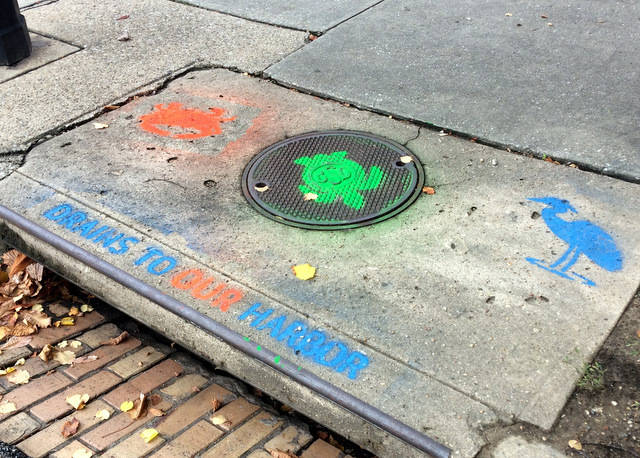 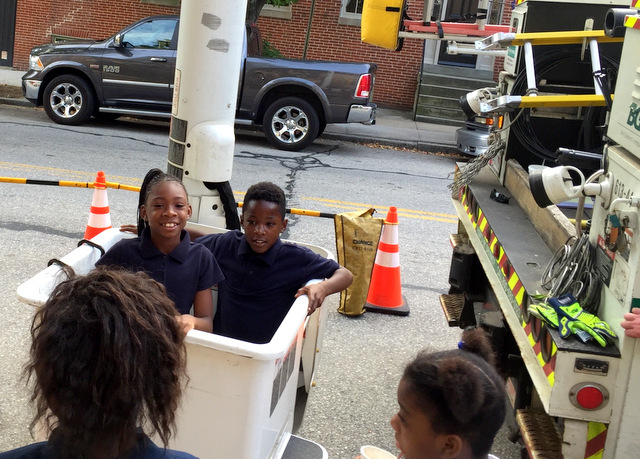 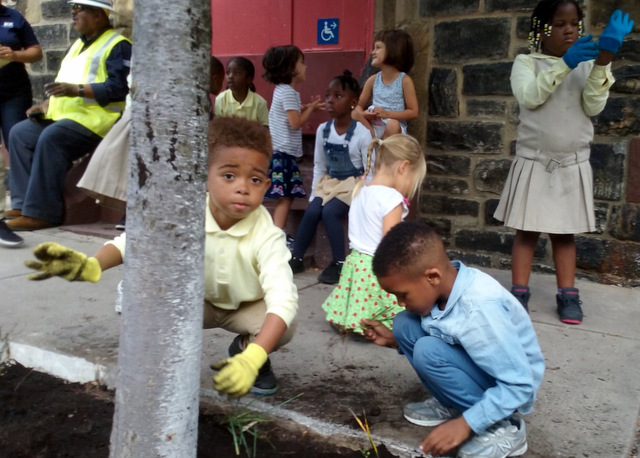 In all, they removed nearly 1,200 sq. ft. of concrete sidewalk, expanding the tree pits by an overall average of 36.2%.  After the kids returned to school, Barbara Cates of Memorial’s Creation Care Team and Dick Williams stenciled two nearby storm drains with messages reminding neighbors that the drains lead directly to the Chesapeake Bay.

Memorial Church ran with the idea, led by bedrock environmentalist, Rev. Grey Maggiano, who encouraged the formation of the Creation Care Team.

As plans progressed, many hands helped make this project successful. In addition to the bucket truck crew, BGE provided a $3,000 Green Grants award to fund the project. Dick Williams noted in particular that Gwen Nolt and Fareeha Waheed of Eutaw-Marshburn Elementary were “the first to embrace the education component of the program,” as far back as July of this year.

He also recognized Bolton Hill neighbor Sarah Lord, who was “so generous with her knowledge of trees, a proper tree pit, our urban environmental challenge, and on-site support with a ‘walk through’ rehearsal.” He also singled out Mount Royal Elementary/Middle School Principal Job Grotsky for helping to connect Memorial Episcopal with folks at other area schools.