Walking into Booker T. Washington Middle School for the Arts made for an intense change of scene. Our sessions there started at 3:30 p.m., just when school was getting out. McCulloh Street echoed with an explosion of shouts as students left the building. 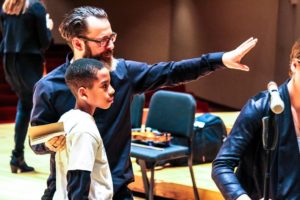 We met our students on stage, in their beautiful auditorium on the lower level of the building. OrchKids staff members Kay Sheppard and Belinda Caesar and Booker T.’s band teacher, Mr. Perry, helped get everyone lined up and focused before we started. But it was tough.

For the first two days, we struggled mightily, trying to start working together. Participants expressed such wildly varying moods and needs that it seemed impossible to all get all of us on the same page to make music together.

Real problems could not be ignored. One student had been jumped at the bus stop on her way home after practice, and accusations of who snitched or what had actually happened permeated our working environment. We walked a fine line between listening and allowing these young people to express themselves, and pushing to realize our potential.

After the third day of rehearsal, we all admitted that we were frustrated and feeling badly about how we sounded. We had been working super hard on a groove we had composed in a 9-beat time, and students wondered whether we should just make it less complicated by putting the piece in a straight 4/4 time. 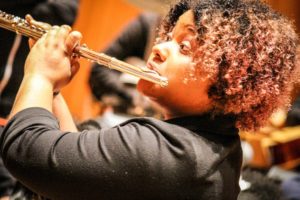 We showed up the next day determined to give our best, and everyone did. When we put that tricky groove in 9 back together with all its layers and parts, it worked! Everyone knew we had done something great, and the enthusiasm and collective energy was a celebration.

By day five, March 18, the composers became the orchestra, taking to the stage of the Joseph Meyerhoff Symphony Hall to perform Leaps and Gaps before a large audience of Baltimore City schoolchildren, as well as friends and family of the performers.

Lasting over 50 minutes, Leaps and Gaps kept the audience rapt and engaged the whole time, repeatedly clapping and cheering for the performers. Everyone leapt to their feet at the end of the performance.

Kay Sheppard of OrchKids said, “it was an experience the kids and I will never forget! Might have been one of the toughest weeks, but it yielded the greatest reward.” She continued by thanking us “for always bringing that extra boost of positive energy into their lives!” 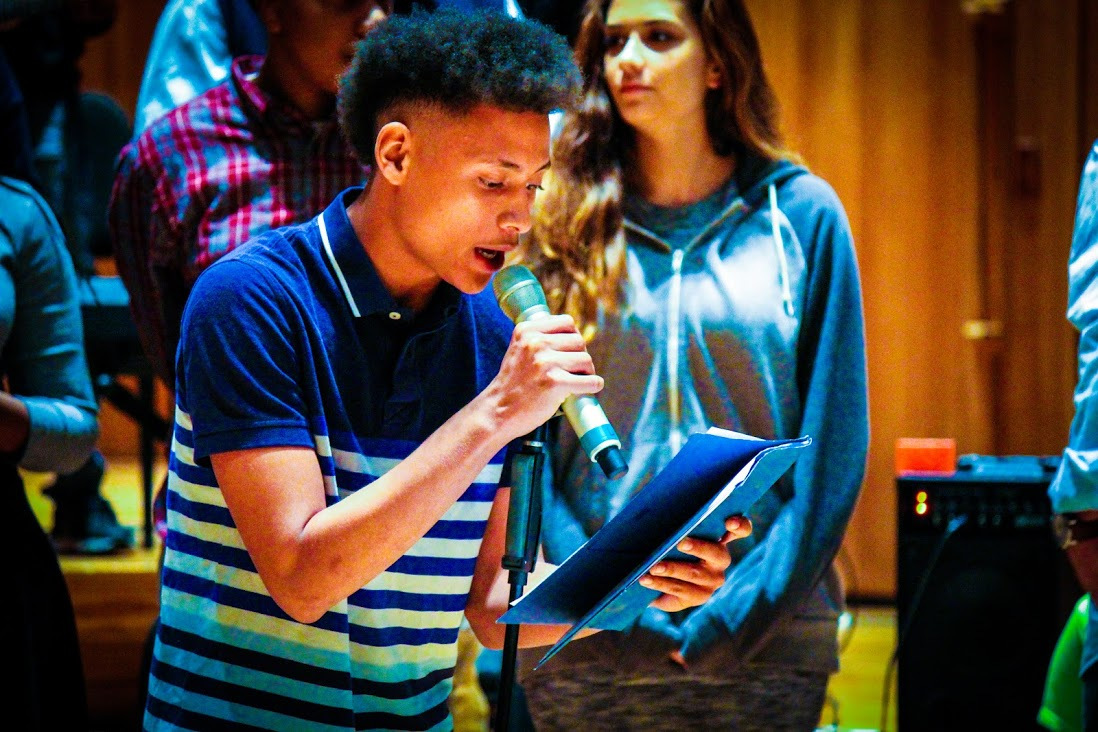 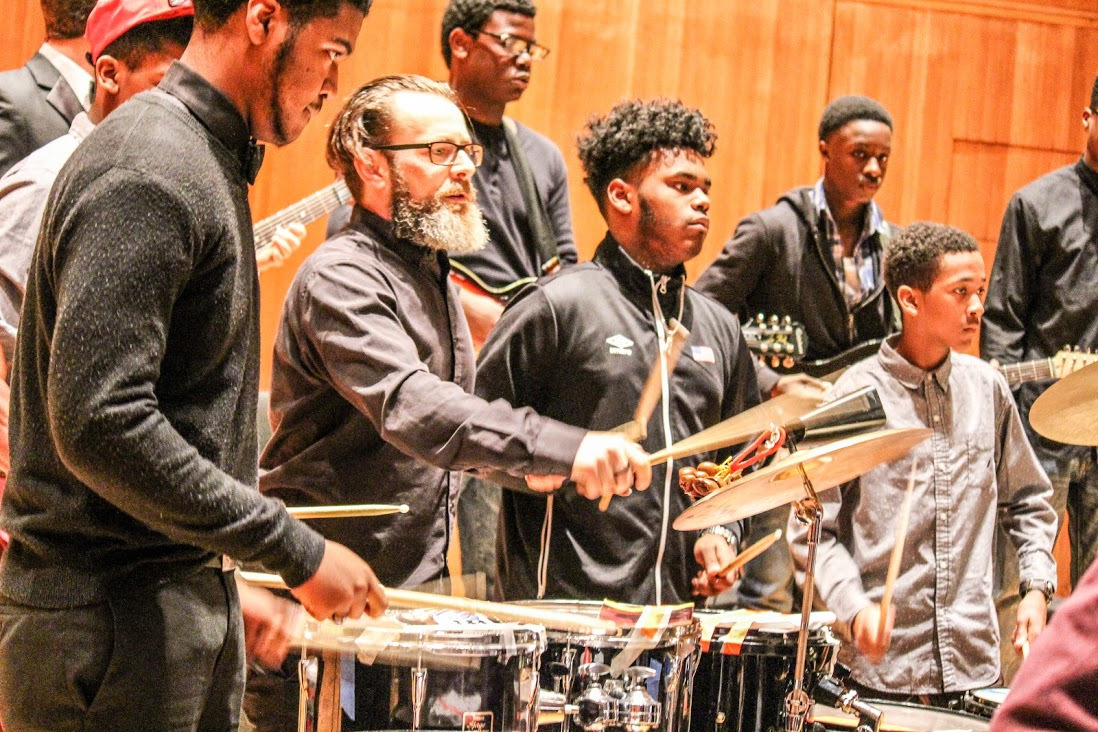 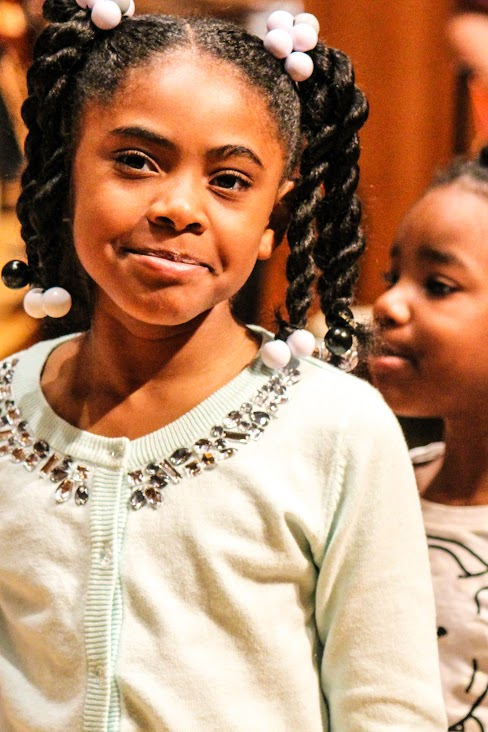 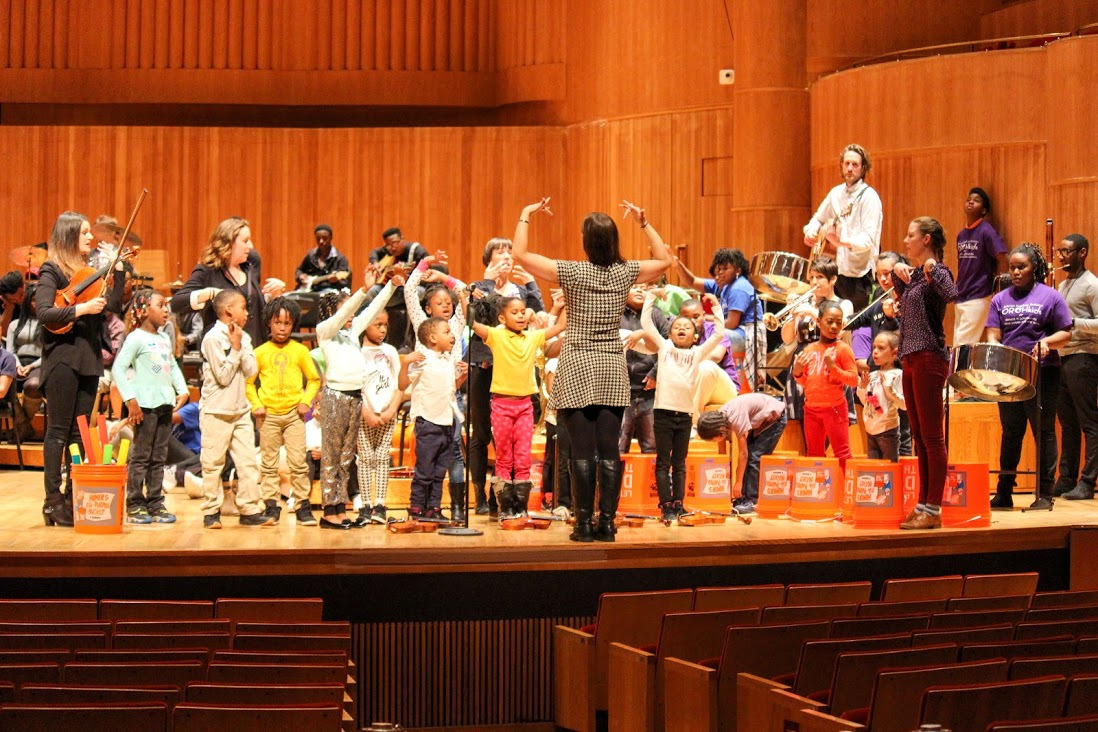 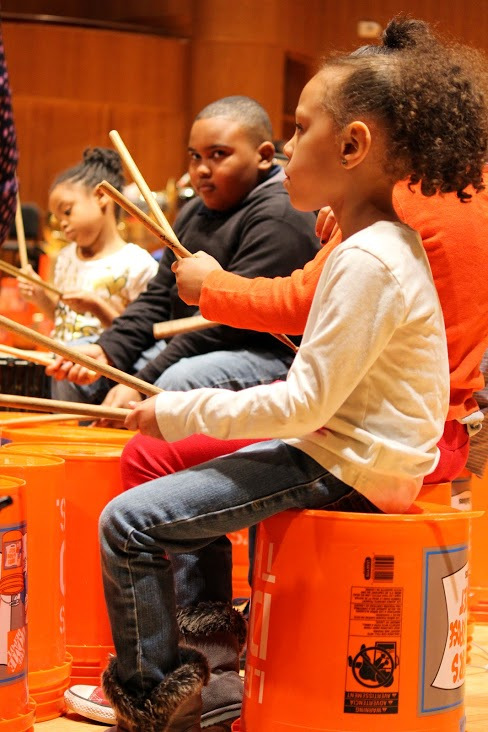 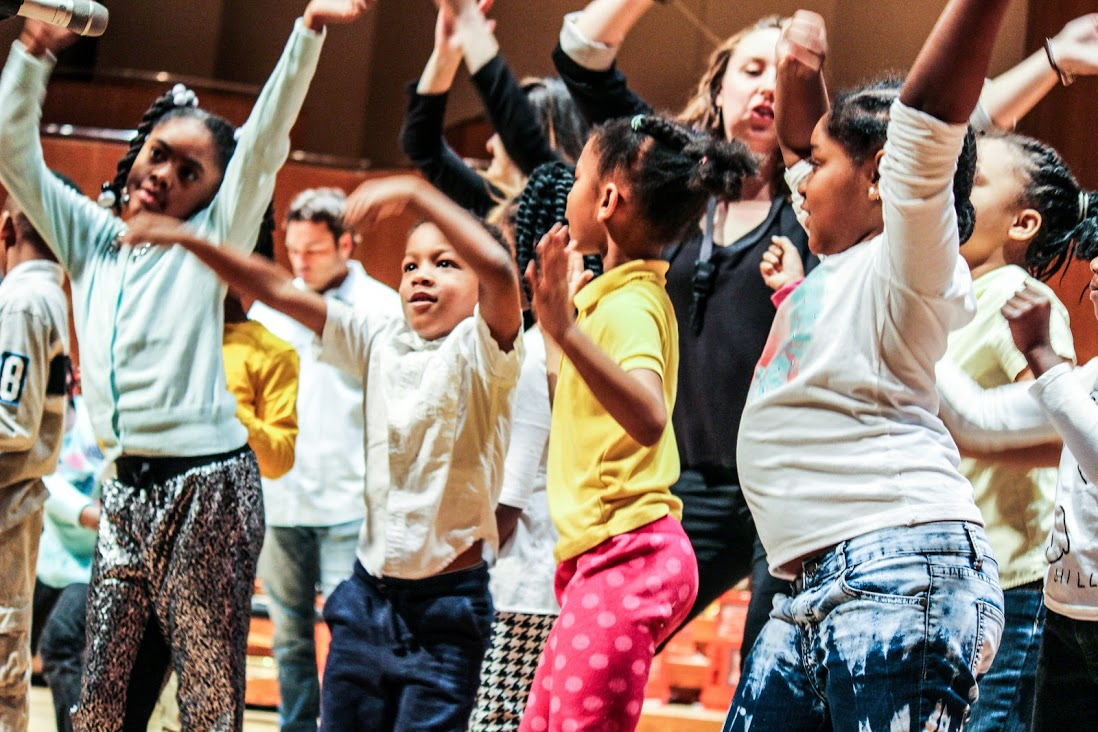 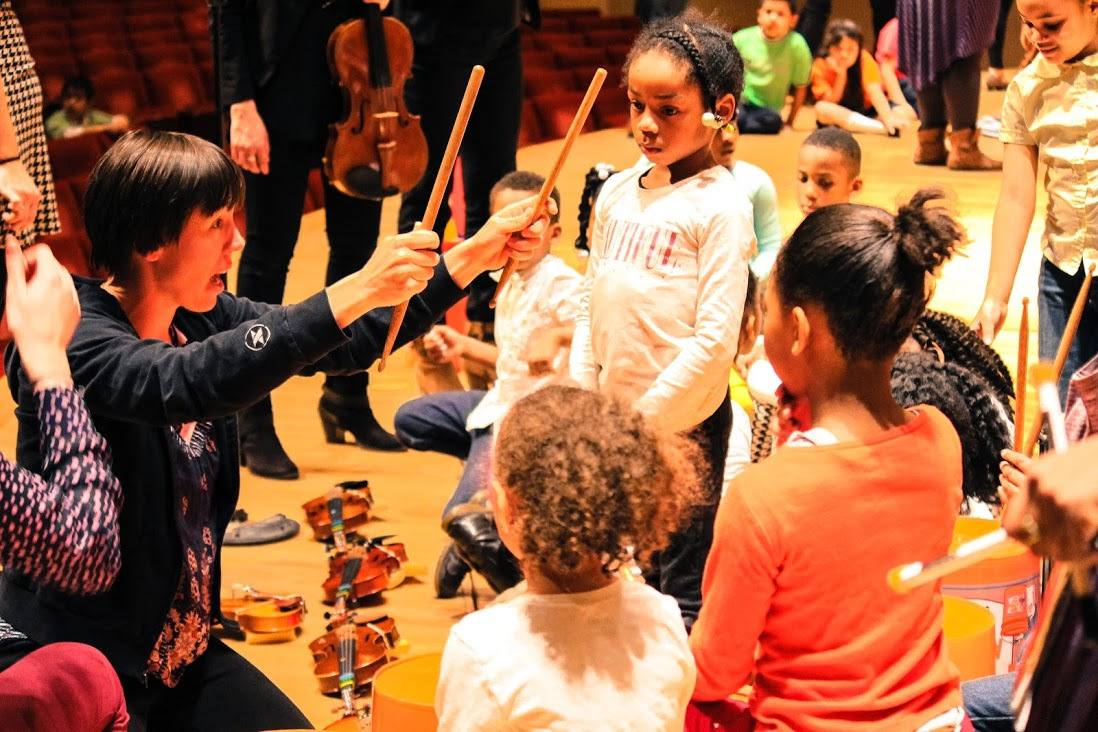 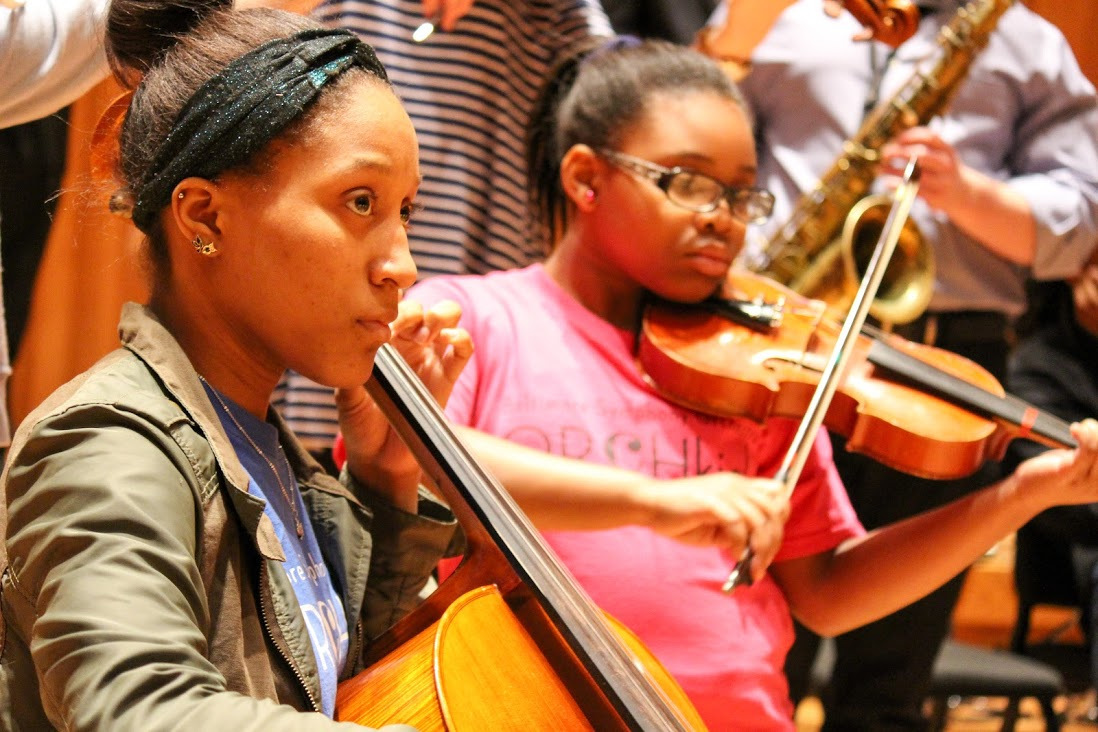 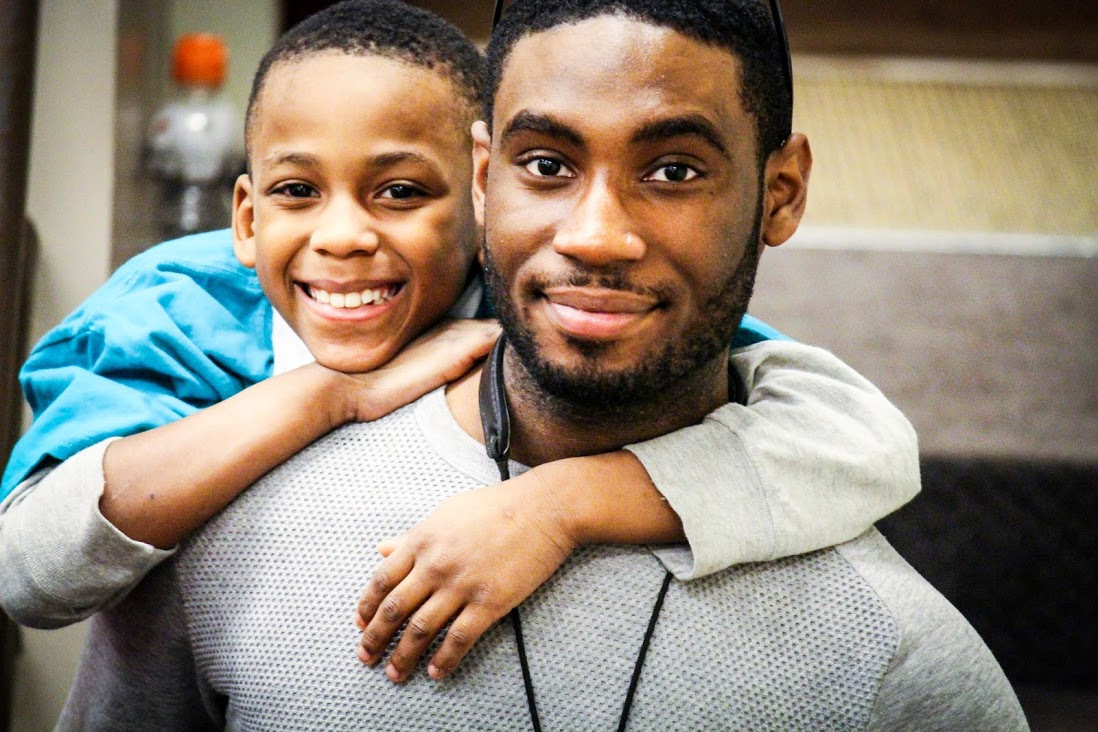 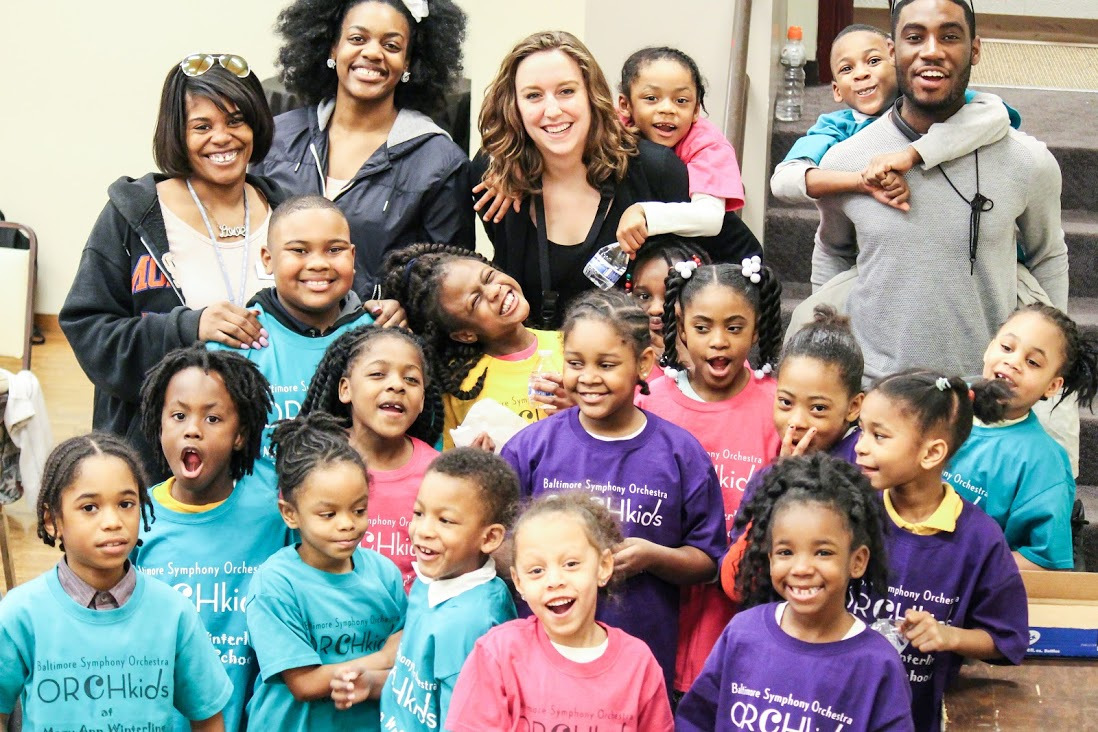 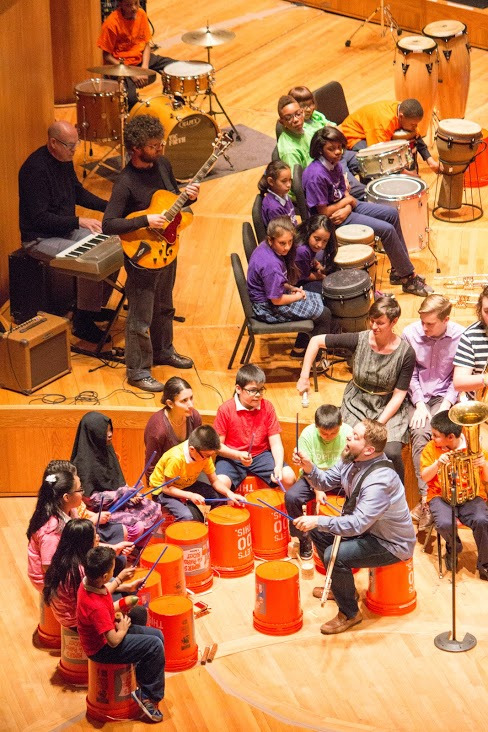 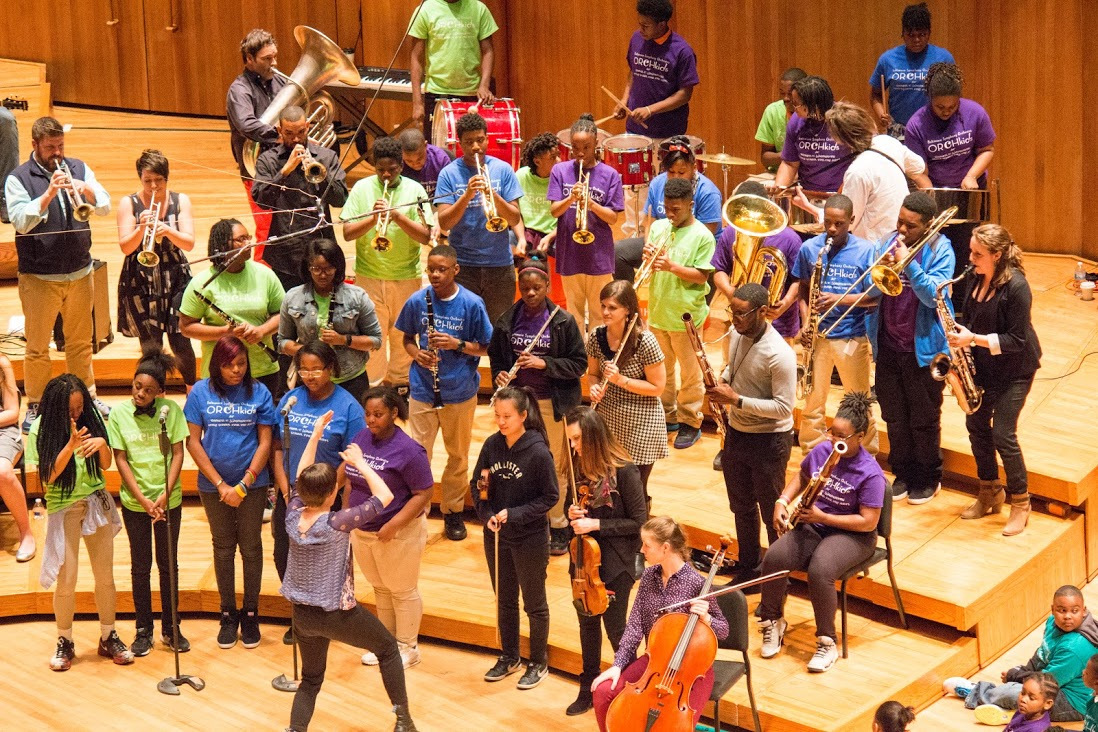 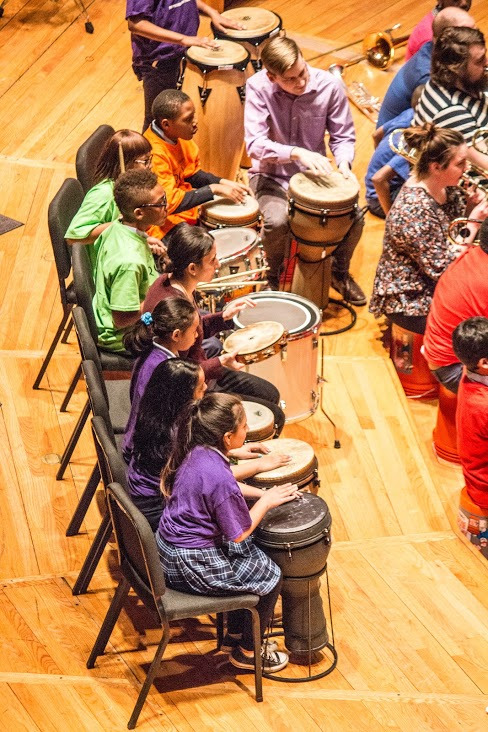 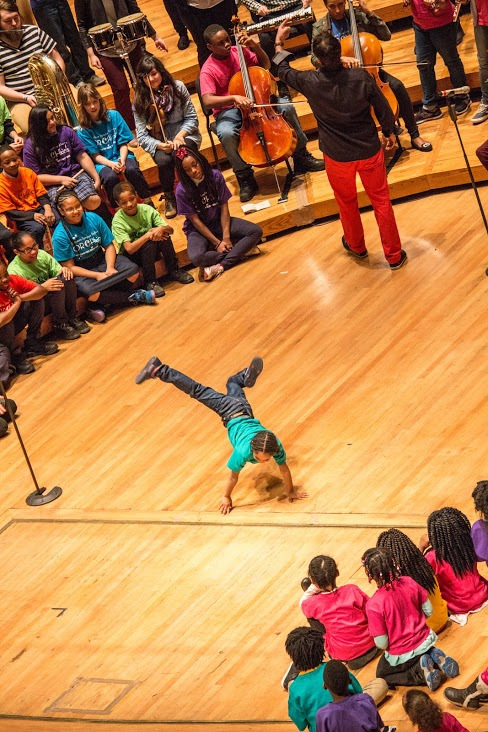 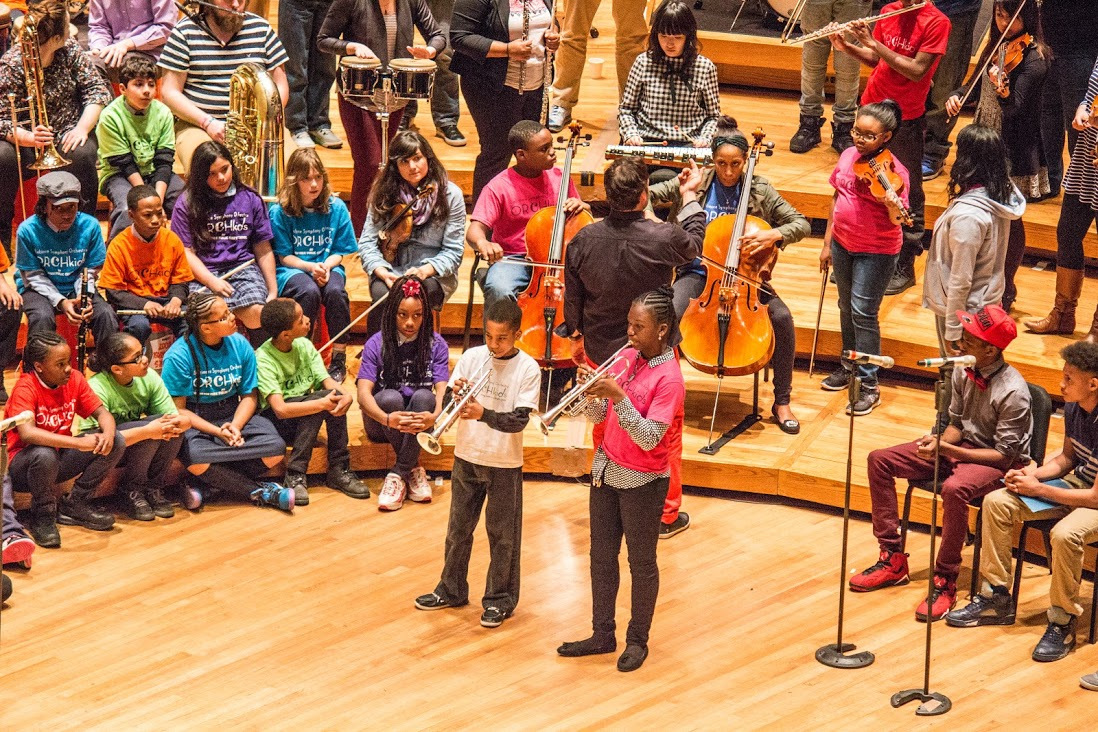 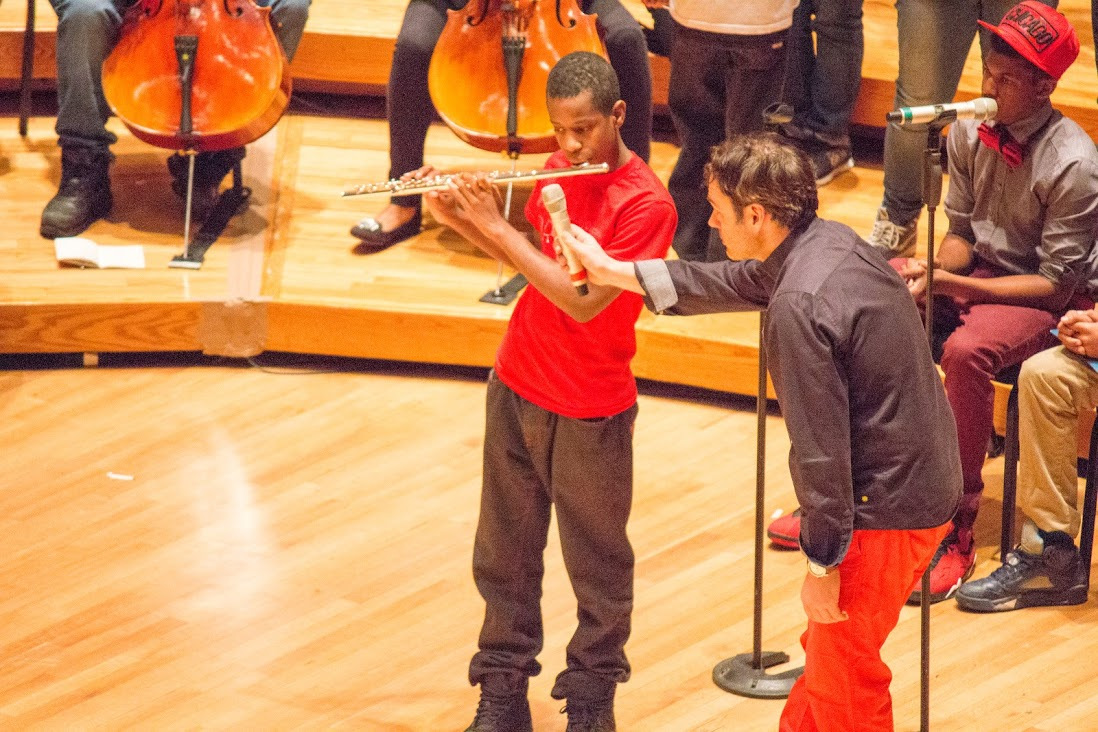 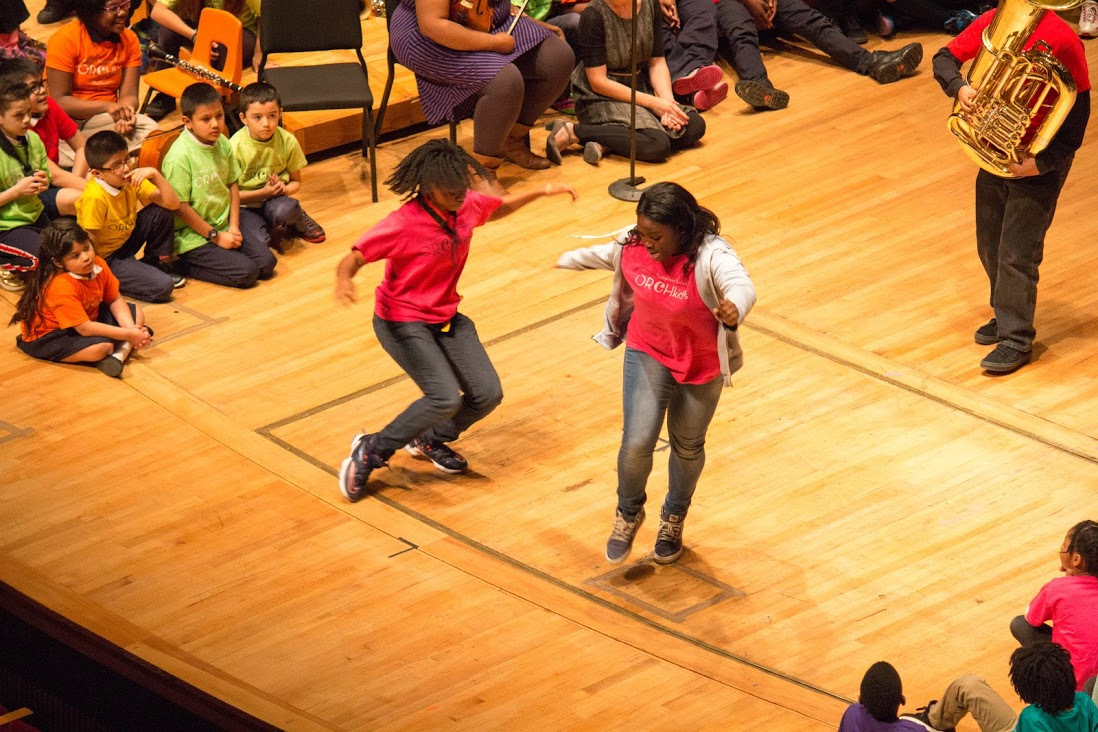 Each student’s voice had a place in the lyrics, the rhythm, and the melodies of the composition, but watching them perform on the Meyerhoff’s stage was even more magical. Carefully following the conductors, the various sections of the orchestra weaved their parts into the whole, augmented by many different soloists, not just instrumentalists, but dancers, singers, rappers, and speakers.

It was a transformative week of musicmaking that brought people and organizations together.

Founded in Baltimore, we at Creative Connections organized our first musical collaboration event here in 2009. Since then, we have returned every year to produce collaborations with Baltimore schools, while expanding our program to offer similar events throughout the country.

Creative Connections is led by a group of musicians, most of us trained in the Guildhall School of Music and Drama’s Master of Music Leadership Course. Samuel Mumford, guitar, and Ross McDouall, drums, both of London, joined the organization for the week at Booker T. Washington. Liza Barley, violin, and Gil Teixeira, guitar and electronics, are based in Pittsburgh.

Our Creative Connections team worked closely with eight Peabody students as part of a residency track to empower new leaders. These classically trained students give up their spring break to work intensively in Baltimore City public schools, earning two credits through this spring break course called Creative Leadership Immersion, where they are challenged to immerse themselves in the community and to play in new ways—improvising, learning by ear and engaging with a wide range of styles and genres of music. Just as the Peabody students bring their musicality to the Creative Connections project, the people of Baltimore City infuse Peabody students with a sense of joy and purpose.

The collaboration and sharing is entirely mutual for everyone involved.

(Editors’ note: See Creative Connections’ Facebook page to watch a Channel 77/Education Channel video about the performance, including comments from many of the participants, as well as another video containing a five-minute portion of the actual performance, conducted by Jill. You just gotta hear it.)