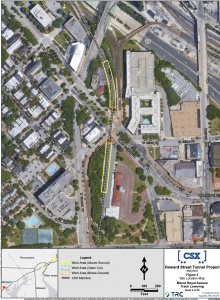 The long-awaited rebuilding and expansion of the Howard Street freight railway tunnel could begin as soon as late summer.  Stretches of Mt. Royal Avenue on the edge of Bolton Hill and the North Avenue Bridge that heads east to Station North will be affected by the massive, $466 million project.

“Our target date for execution of these documents is July 1,” said an official of the Maryland Port Administration, referring to a final financing agreement between federal, state and CSX railroad officials and the finalization of an environmental review.  The plan is to increase the height of the 126-year-old tunnel to allow for cargo containers off-loaded at Baltimore’s port to be double-stacked on rail cars and hauled north.

The current tunnel was built by the old B&O Railroad between 1890-99 with a vertical clearance of 19.5 feet.  Double Stacked Trains (DST) require at least a 21-foot clearance, available on tracks up and down the Eastern Seaboard except for the Baltimore-to-Philadelphia stretch.  Once completed in 2024, double stacking will enable the fast-growing Port of Baltimore to further increase container capacity and become more competitive. It is already further inland than other ports.

To reach the desired clearance height, engineers will dig down beneath existing tracks in some locations while working above ground in others.  The 1.7-mile single-track tunnel runs mostly under Howard Street from Camden Station near the Orioles stadium to Mt. Royal Station, now part of the MICA campus at Mt. Royal Avenue and Cathedral Street at the southeast border of Bolton Hill.  Click here for a video that explains the entire project in detail.

According to the video, most of the track-lowering work will take place inside the existing tunnel with little impact above ground.  There may be some above-ground consequences to one or more buildings on the MICA campus.  The North Avenue Bridge will be partially replaced by a single-span shallow girder bridge, with traffic disruptions during construction.  Existing rail infrastructure under that bridge makes track lowering not feasible, the builders say.  The MTA Bridge on the western edge of Station North also will be affected.

Meanwhile, there’s possible  good news for Amtrak riders and MARC train commuters.  The Baltimore Business Journal reported that the American Jobs Act, the massive infrastructure improvement proposal by President Biden, envisions funding for replacing the 148-year-old Baltimore and Potomac Tunnel located between Penn Station and the West Baltimore MARC Station.  That 1.4-mile tunnel creates a “chokepoint” on the busy Northeast Corridor by forcing trains to drop their speeds to just 30 miles per hour.

That new tunnel would include four tracks and consist of 3.67 miles of new rail between Gwynns Falls Bridge and Penn Station.  This cuts through under Reservoir Hill and other residential areas south of Druid Hill Park, although not Bolton Hill.  The estimated cost for the replacement is $4.5 billion.

And the would-be builders behind the long-simmering plan to revamp and expand Penn Station into an elegant transit hub surrounded by new residential and office buildings, not unlike DC’s Union Station, released yet another set of drawings in March.  The lead developer said a first stage with upgrades to the interior and infrastructure of the bedraggled station will begin this summer.  That will include new windows, a new roof and new retail space on the first floor.