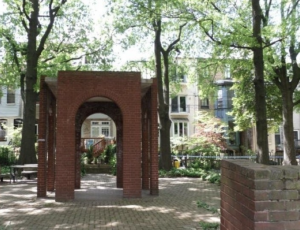 Bolton Hill was open land in the late 1700s, drained by streams that fed into the Jones Falls. One, Spicer’s Run, ran down from Reservoir Hill, emptying into the Falls just south of where the North Avenue bridge stands today.

Just downstream was a water-powered grist mill that, by 1800, was owned by John Rutter, whose family owned property in the neighborhood along the banks of a tributary of Spicer’s Run. That body of water became know as Rutter’s Mill Run.

By the late 19th century when the rowhouses on John Street, Lafayette Street and Mt. Royal Avenue were in place, those waters were channeled and covered over. Some say that they may still be heard on quiet nights, running beneath them.

For the first half of the 20th century, a row of two-story alley-houses like those on the 1300 bock of Rutter Street today stood on the site of the park, occupied by working-class African Americans. These houses were demolished as part of the urban renewal efforts of the mid-1960s.

One consequence was the further racial segregation of Bolton Hill. Another was the creation of the Rutter’s Mill Park. A committee of neighbors was given three choices by the Urban Renewal Agency: the land could be used for parking, could be developed as student housing for MICA or could be turned into a park. They voted for a park and chose local architect Constantine “Gus” Courpas, to design it. His plan considered the look of the buildings at the Mosher Street end of the plat and the studio of sculpture artists Reuben Kramer and his wife Penne, who were for many years the patrons and caretakers of the Park.

Today Rutter’s Mill Park is maintained by its neighbors and the household that backs on it, collectively forming the Rutter’s Mill Park Association. Although the city has been called on for major repairs, the day-to-day upkeep and beautification is the responsibility of RMPA. This “backyard” for 40+ residences and two elementary schools is also a source of quiet pleasure in a bustling urban environment.