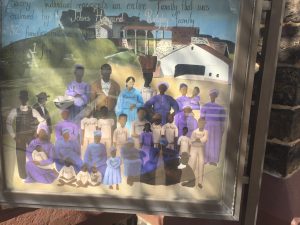 Artist’s rendering of slave families that resided and worked at Hampton Plantation.

We often hear stories of injustice and think, “Why don’t they do something about it?”

The next question, of course, is, “Who is THEY?” Congress? The President? Injustice is rarely remedied from the top down. It takes small groups of people, growing by one or two at a time. Change begins to happen when understanding injustice moves from the abstract to the personal.

I had known for a long time that I have a connection to the Ridgely family. I knew that they were slaveholders, but only in the abstract. When the Rev. Natalie Conway learned that she too had a connection to the Ridgely family, her life changed, and my life changed. She is descended from Hattie Cromwell, a slave on the Hampton Plantation, and I am descended from Prudence Ridgely, a member of the slaveholding family.

A plaque in the back of Memorial Episcopal Church was dedicated to the Rev. Charles Ridgely Howard, who was rector of the church until his death in 1862. Memorial Episcopal and the Diocese of Maryland brought us together. The Ridgelys had farms and an ironworks. They got rich. The Cromwells had nothing; even their humanity was denied.

What does this have to do with us, 200+ years later? Well, because THEY didn’t do anything about the injustice, THEY left it to us. We do have a choice. We could leave it to the next generations. But that would compound the injustice even further. There is no “fix,” no “solution” — only small steps towards a better future. 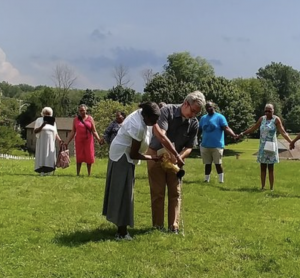 The Rev. Natalie Conway and the author pour holy water at the Hampton Estate slave quarters.

So when you have a moment, stop by the corner of W. Lafayette Ave. and Bolton Street. Take a look at Dez Thaniel’s artwork. Ask yourself why Memorial Episcopal chose to commission this work at this time. Don’t they have better things to do during a pandemic? But also think about how our society would be better today if the church had started on this work 150 years ago.

Change happens because of us. House Resolution 40, seeking reparations, was first introduced in Congress by Rep. John Conyers  (D-MI) in 1989. He died in 2019 still trying to get it enacted. One reason that it failed to get traction is that too many white people think about slavery in the abstract, or not at all.

In August 2019, Memorial and another West Baltimore Episcopal congregation, St. Katherine’s, took a field trip to the Hampton Plantation. We visited the family house, the slave quarters, and the cemetery. We poured holy water on the grounds. Symbolic? Yes, but an important step, nonetheless.

Are we rewriting history? I certainly hope so. Too much of American history has been ignored. I thought I was well educated, but this process has laid bare some enormous gaps in my education. I want future generations to have a better understanding of history than our generation.

Re-thinking history can be hard, but well worthwhile. A small amount of research can snowball. And a bit of critical thinking can lead to new understandings for the benefit of all.  Whatever you can do, do it, and add others to the conversation.