Meet the new occupants of the Hawley – Hutzler Mansion 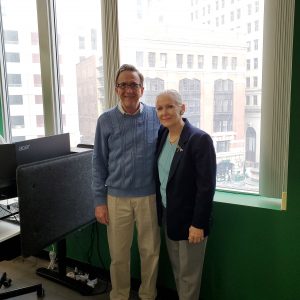 When you move into a stately 8,000+ square foot house that has suffered its share of injuries and indignities over 134 years, the key question is: where do we begin?

“Our immediate goal is to make the downstairs more habitable in time for my 75th birthday party in mid-June,” said Ward Bucher, who with his wife Lisa Harley Johnson are the new and hopeful owners of a neighborhood jewel, the pink granite mansion at the northeast corner of Eutaw Place and Laurens Street, known as the Hawley-Hutzler Mansion.

Built in 1887 by wealthy lumber wholesaler Martin Hawley as a showplace residence for himself and his wife Mary (and perhaps his wood products), the house has 12 fireplaces including one surrounded by cut quartz tiles and another of carved stone;.  It also features stained glass windows; a wide range of panels, stairs, mantles  and other accents made from different woods; original parquet floors, an elevator (non-working); a garden surrounded by 7-foot brick walls across from Sumpter Park, quarters for a flock of servants  and a cupola from which the Hawleys could look out on the newly developing streetscape .

Hawley died shortly after moving in, however, and the house was auctioned off in 1897 after Mary Hawley’s death for less than the $80,000 it cost to build (about $2.3 million in today’s dollars).  The winning bidder was David Hutzler, one of three Hutzler brothers whose Maryland department store chain flourished for more than a century before the final store closed in 1990.  The Hutzler family moved in but also kept a “country” estate in Pikesville.

Last year before the Bucher-Johnson family could even get the place appraised they had to find someone who could restore the plaster walls.  They moved into the years-vacant main residence in July, well into the COVID pandemic, along with their son Jack, who is sitting out a year after high school and planning to attend St. John’s College next fall.  Two large apartments on the third and fourth floors have rental occupants.

Johnson and Bucher are not strangers to old and battered properties.  Bucher is an architect whose 40-year practice has focused on restoring, repairing  and repurposing old buildings.  Among them are the Star-Spangled Banner Flag House and museum on East Pratt Street, now a national monument, and the old Belnord Theater near Patterson Park, now home to Casa Maryland in Baltimore, as well as a variety of mansions and museums in the Mid-Atlantic region and beyond.  Lisa has worked with non-profit organizations and in philanthropy in the Washington-Baltimore region and has historic preservation in her DNA.

“I grew up in a large house in Madison, WI.  My mother was a preservationist and a gardener, and I’m getting ready to bring our 46 x 48-foot garden back to life,” she said

She and her husband write a blog in which they track the history and restoration of the mansion they now call home.  Delving into the house’s history, she worked with the Jewish Museum of Maryland’s archivist who put her in contact with the grandchildren and a cousin of David Hutzler.  David Hutzler died in 1914 but his widow, Ella, lived in the Bolton Hill home until 1942.

For intervals between 1950 and 1970 the mansion served as offices and from 1971-76 as an orphanage and home for troubled boys.  Mostly, however, it has been a private residence.  The apartments were carved out of the 13-bedroom 7 ½-bath structure In the late 1970s .  The garden was paved over during the orphanage era.

Lisa Johnson worked in and around D.C. from 1990 after attending the University of Wisconsin.  Bucher is from northern New Jersey, attended college in New York and worked in the Washington area from 1971.  They married in 1999 and in 2001 bought and restored an old African American schoolhouse in Talbot County on the Eastern Shore, first as a second residence and then for a while as a primary home.  Together they operate Encore Sustainable Architecture from a downtown Baltimore studio.  They moved here from Silver Spring.  Bucher’s son, Will, 31, is a lawyer in Florida.

“We love the Bolton Hill neighborhood, although we haven’t met many people because of the pandemic,” Johnson said.  “We’ve settled in, though, and look forward to getting out more.”

As for the house restoration, “it’s a 20-year project for us both,” Bucher said.