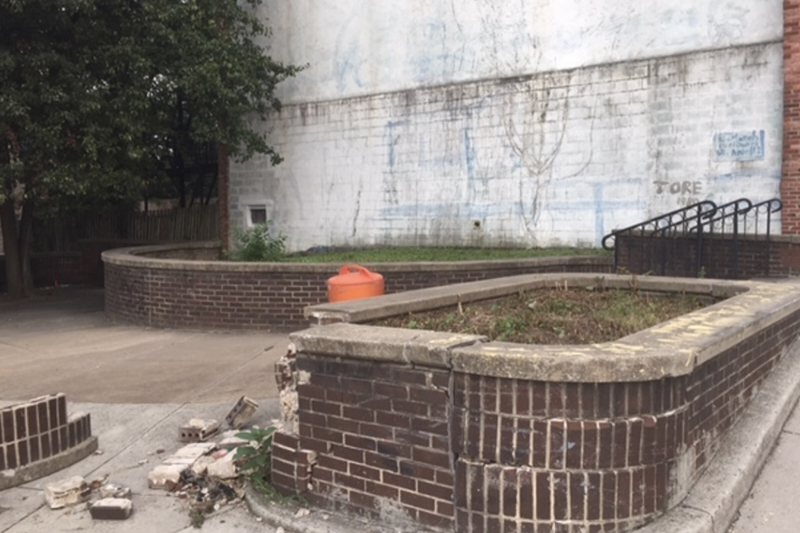 Despite its prominent location at the north end of the neighborhood, the corner of Park Avenue and North Avenue is a neglected piece of Bolton Hill. It’s mostly covered in sterile concrete. The facing row house wall is bleached and speckled with grime.

Two raised brick planters could give the space more life but only weeds grow in them. One of the planters was bashed and broken by a car accident that ran well onto the sidewalk. An overgrown tree at the other end of the planters obscures a pair of benches beneath it. And at the bus stop bordering North Avenue, awaiting bus riders are more focused on the next bus than paying the space much attention.

Since the lot is not a park and isn’t privately owned, the Bolton Hill Community Association is working with Baltimore’s Department of Housing and Community Development and Midtown Community Benefits District to rehabilitate it. First, the City will assist in ascertaining the boundaries where various entities may have jurisdiction.  In addition to the Baltimore Department of Transportation, the Maryland Transit Authority bus stop may be responsible for a portion of the lot; same with Baltimore Gas and Electric. We’ve also confirmed that the North Avenue Rising streetscaping project is not planning to touch the lot.

Concurrently, we are exploring the possibility of obtaining sketches of ideas from landscape architecture firms of what the space could look like, which can be used, in turn, to apply for grants to reanimate the lot with less concrete and more native foliage. The owner of the bordering row house is interested in eventually painting a new mural on the row house wall, as is the prospective owner of the other row house across Park Avenue. As plans for the lot and murals develop, we’ll want to elicit input from our Reservoir Hill neighbors as well as MICA, which owns property just east of the lot. The hope is that the space will be transformed into an attractive gateway to the neighborhood.

by David Nyweide and Chris Kingsley